Fancy a Jetsons-style flying car for a sustainable future?

Weblog: Researchers find that flying cars may cause less damage to environment 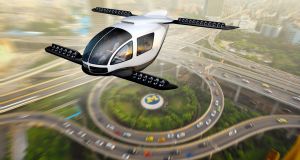 Up, up and away: flying cars might solve the problem of traffic congestion in dense urban areas.

We think of them as the flying cars from classic cartoon The Jetsons but they are formally known as electric vertical takeoff and landing aircraft, or VTOLs. Right now, scientists the University of Michigan alongside researchers from the Ford Motor Company are exploring the environmental sustainability of a future where we rely on such transport.

As well as generating less air pollution, these flying cars might solve the problem of traffic congestion in dense urban areas. Already, a handful of aerospace companies and start-ups are working on this technology. NASA, Airbus, Boeing, Joby Aviation and Lilium are all working on VTOL prototypes.

“To me, it was very surprising to see that VTOLs were competitive with regard to energy use and greenhouse gas emissions in certain scenarios,” said Gregory Keoleian, director of the Centre for Sustainable Systems at U-M’s School for Environment and Sustainability.

“VTOLs with full occupancy could outperform ground-based cars for trips from San Francisco to San Jose or from Detroit to Cleveland, for example,” he added.

1 47,000 homes need to be built each year to solve housing crisis, report says
2 Jervis shopping centre takes major tenants to court over rent disputes
3 Can Covid free your workplace of bureaucracy?
4 How Argentina and its creditors thrashed out a $65bn deal
5 Hairdressing 7% more expensive in July as prices declined across economy
Real news has value SUBSCRIBE