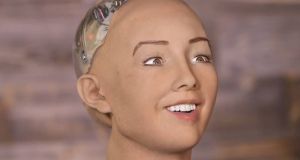 Sophia, the robot who has been granted Saudi citizenship

Back in July, Ben Goertzel, chief scientist at Hanson Robotics, trotted out two of his robots, Sophia and Han, to attendees of the Rise technology conference in Hong Kong.

Given that they are not fully autonomous – many of their movements and interactions are pre-programmed – they weren’t very convincing but it made a media splash.

A few months later and the second splash: Saudi Arabia has become the first nation to grant citizenship to “female” robot Sophia.

In light of the restriction of women’s rights in Saudi Arabia, Twitter was ablaze with the fact that Sophia was not wearing the headscarf and abaya that human women are expected to wear when in public (although footage from the event showed that not all female speakers were wearing these items of clothing inside the venue).

“It is historical to be the first robot in the world to be recognised with citizenship,” she/it said while addressing the audience at the Future Investment Initiative in Riyadh last week.

What is interesting, going forward, is the implications for AI and robotics: does citizenship infer personhood? The legal status of personhood for robots has already been discussed by the European Parliament in conjunction with the advent of “smart autonomous robots”. I’m not sure Sophia falls into this category.