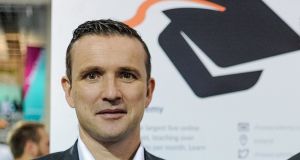 The moves comes as the company has this month raised more than €2.5 million via the Crowdcube platform.

Given the success of the campaign, the company has extended it until the end of November.

“Despite planning to close the fund at the end of October we were inundated with requests from investors who simply needed more time to make arrangements. Additionally, the domino effect of raising such a substantial amount within a short period has led many of our new crowdfunding investors request an increase in their original investments,” said Shaw Academy co-founder James Egan.

Mr Egan and Adrian Murphy established the Shaw Academy five years ago. It has an elearning centre at East Point Business Park and employs 180 people in Dublin and Bangalore.

The firm provides live online course in areas such as IT, business and marketing. It has taught more than four million students worldwide and is currently teaching more than 250,000 new pupils globally every month. It expects this figure will have jumped to 500,000 by the end of 2017.

The Shaw Academy said it intended to use the additional funds to develop a number of new courses and recruit more experienced educators.

“Crowdfunding has been an ideal fit for Shaw Academy. Prior to launching we received substantial support via pledges from our own community and the success of the raise to date is a testament to our students all over the world who have invested in their droves and firmly support and believe in the future of the business,” added Mr Egan.