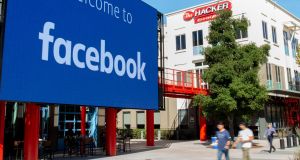 Facebook likes to roll out the red carpet for its biggest advertisers, offering everything from birthday cakes to ski trips, and dinners at the Silicon Valley home of its chief operating officer Sheryl Sandberg.

The social media company made nearly all of last year’s $71 billion (€62 billion) in revenue from advertising and has worked hard to build relationships with both brands and advertising companies, through a clubby network of invitation-only groups called client councils.

Starting with a 12-person “global client council” in 2011, these have expanded to 11 forums with dozens of members globally.

These close ties have helped Facebook continue to strongly grow its advertising sales, weathering competition from its rivals as well as high-profile scandals, from the Cambridge Analytica data leak to the live-streaming of a terrorist shooting in New Zealand.

“The objective of the exercise was that those people who would feel most in the know would be the ones that would be more likely to lean towards forgiveness and collaboration than accusations about business practices,” said one high-profile advertising executive who is a former global client council member.

But the relationship between Facebook and its advertisers has been strained to breaking point by the furore over the platform’s failure to tackle hate speech in the wake of the killing of George Floyd and ahead of what is expected to be a deeply polarising US election.

Several of the top brands that sit on Facebook’s client councils, including Coca-Cola and Unilever, have joined a call to boycott the company’s platforms, and some executives have expressed frustration at the company’s defensive tactics. Others, such as Disney and Walmart, have remained loyal.

While Facebook has tried hard to assuage their concerns, many advertisers privately criticised the company’s practice of wooing them during the good times, and then expecting that reassurance – rather than change – will suffice during the bad.

“There’s an element of fool me once, shame on you, but fool me twice, shame on me. You can only cry wolf so many times,” said a marketing executive at a Fortune 100 company.

“They do make people feel special,” said one agency executive, and a council member. “[but] everybody has probably been waiting for their opportunity to punish Facebook. There’s probably been a long-term undercurrent of frustration with the company where no one has had the ability to act. This gives a legitimate reason to [do so ].”

The person who built Facebook’s network of councils is Carolyn Everson, vice-president of global marketing solutions. Her background includes co-founding – then getting fired from – Pets. com, one of the biggest casualties of the dotcom boom and bust.

Little-known outside of advertising, she has a legion of fans in the industry. One advertising agency executive described Ms Everson as a “consummate diplomat”, adding that there was “much love in the room” for her. “You’d want to sit next to her at dinner,” the person said.

David Jones, the former chief executive of advertising group Havas who sat on the very first iteration of the global client council, said: “If you look at why Facebook became so successful, Carolyn Everson played an enormous role in that.”

It was Ms Everson who tried to stem the damage as the latest campaign to boycott Facebook gathered pace, sending out a nine-point letter to advertisers highlighting the steps the company was taking to address concerns, before later organising multiple video conferences with brands and agencies.

Several marketers – including people who have sat on councils as well as those who have not - outlined a “Facebook playbook” during a crisis, in which the company holds emergency meetings and phone calls to appease concerned advertisers as scandals ripple through the media.

The former global client council member, who asked not to be named because Facebook requires members to sign non-disclosure agreements, said that the company would privately “disclose stuff on the edge of being material public information” that was “interesting and insider . . . but not tradable” so that having a seat at the table was essential. But the person labelled the group a “controlling mechanism” for “manipulating people to . . . look over obvious issues”.

Some also described pressure to refrain from public criticism of Facebook.

Rishad Tobaccowala, a senior adviser to Publicis who spoke to the Financial Times in a personal capacity, said of the industry’s relationship with Facebook more generally: “You’re being treated well, you’re getting taken out to dinner . . . [but] you’ll get grief if you speak out.

“Sometimes there’s a bullying aspect to it . . . Since when did any company tell another company to toe] their party line?”

Ms Everson declined to comment. A Facebook spokesperson said: “Any suggestion that we silence our partners is categorically wrong when in fact the opposite is true.”

They added that Facebook’s teams have “a long history of working with the industry”, citing work with trade associations and other partners “to encourage candid feedback so we can continue to improve”.

With a characteristically personal touch, Ms Everson published a heartfelt Facebook post last month that showed the strain of the current crisis. She said the last month had been “the hardest stretch of my professional career, with endless days, sleepless nights and more than a few tears”, prompting outpourings of support from several high-profile marketing executives.

The company has also pulled other levers. In one document shared with advertisers, seen by the Financial Times, Facebook compiled a table directly comparing its policies against those of the other big social platforms. “It was definitely Facebook’s strategy to drag in the other platforms,” the agency executive said. “They said – if you boycott us, you are going to have to suspend everyone.”

But the efforts have had mixed success. More than 1,000 advertisers have now joined the boycott.

Some suggest this is because being seen to come out on the wrong side of history presents a reputational risk to the brands themselves, unlike Facebook’s other scandals. Others note that the issue has escalated to the board, above the heads of the advertising and marketing officers courted by Facebook.

“Boards are paying attention [to the social issues], and boards do not get amused because Sheryl is calling them. They are not going to [potentially at a later date] get jobs at Facebook, they don’t have a chummy relationship [with Carolyn],” Mr Tobaccowala said.

Nevertheless, there are those who remain sceptical that Facebook will make meaningful changes, suggesting most advertisers will await a middle ground before begrudgingly returning.

1 ‘Saudi Arabia is where the opportunities will happen in future’
2 MSD buys Takeda biologics plant in Dunboyne
3 What will the office market look like after the great remote working experiment?
4 Scars from the crash give Irish banks 2.6 billion reasons for Covid caution
5 Refurbished Cafe en Seine doubled sales to €9.5m before pandemic
Real news has value SUBSCRIBE