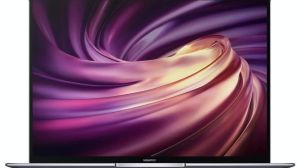 It feels a bit like a Macbook, but not quite

There is a lot about Huawei’s latest laptop, the Matebook X Pro, to love. The charger, for example, is impossibly small, so it can be thrown in your handbag. That’s if you even need to bring it with you, because the battery life is also excellent; when it kicked into battery-saver mode, I still had more than an hour left before I needed to charge. The power button doubles as a fingerprint sensor so there is no need for a separate button, as you have with TouchID on the Macbook Air.

There are two USB C ports on the left side of the machine, one of which is used for charging the laptop. Huawei has also included the standard USB A port on the other side of the case, so you aren’t left scrabbling for adapters just to plug a USB stick into the laptop, should you need to do so. And, speaking of adapters, Huawei has also thought ahead and included a USB C adapter in the box, so you can hook up an external display.

The 13.9-inch display itself is bright with good colour reproduction, and there are some good speakers built in. The days of tinny sound from your laptop are long gone.

It feels a bit like a Macbook, but not quite.

One thing you notice about the Matebook X Pro is that the display is almost borderless, claiming a 91 per cent screen-to-body ratio. You can’t even see the usual webcam set into the screen, the border is that thin. That’s because Huawei has decided to move it from the usual position. And this is the point where I fell out of love a little bit with the Matebook X.

After being largely ignored for a long time, webcams have suddenly become important to people. During the pandemic shutdown, we embraced video calls and Zoom meetings for both work and leisure. We had birthday parties over Skype and family quizzes on Zoom. Facing the prospect of further shutdowns, a good webcam in your device is now essential.

Huawei, in its wisdom, decided to move the webcam to the keyboard, hidden away under a button with the camera icon. It seems like a clever idea; not only does it free up the screen space, but from a privacy point of view, you don’t have to mess around with add-on shutters for the camera, or a piece of black tape. The camera can be tucked away with one press of a button. It’s all very neat.

Then I opened up the camera app to test its quality. The initial “how clever” turned to “oh God, no”. The quality of the camera is fine, but the angle of the webcam, regardless of whether you are sitting at a regular desk or working off your lap on the sofa, is unflattering to almost everyone. It peers up at you from below, showing a good amount of chin and an upsetting amount of nostril. If selfie culture has taught us anything, it’s how to find your angle; let me tell you, this isn’t it. For anyone.

We’ve all spent a lot of the past few months staring at our friends, family and colleagues in various unflattering poses as we embraced Teams calls and Zoom quizzes, but, over time, we got the hang of angling the screen to make sure we were capturing our faces rather than our necks. Short of slapping the laptop on an angled stand, it’s impossible to do that with the Matebook X Pro.

That means a separate webcam is necessary, which is a pain.

Webcam aside, how does the Matebook X Pro perform? For most tasks, it did fine. Over the course of the review, I swapped it out for my usual work laptop. That meant word processing, a little image work, and the use of a virtualised desktop over VPN. It sailed through all that with ease.

Where I do see some stutters was while doing heavy-duty graphics work, such as 3D rendering.

The version I reviewed had a 10th-generation Core i7 processor, with 16GB of RAM and 512GB of storage. The graphics come courtesy of a GeForce MX250 card, which is considered the lower end of the spectrum when it comes to graphics cards. It will do the essentials and then some, but don’t push it too hard.

The Matebook X Pro looks great, has a comfortable keyboard that is reasonably quiet and a great battery. The screen is also impressive, and Huawei has fit a lot more into a small space thanks to the borderless design.

That webcam. The bad angle is enough to put you off using it - not feasible in the current pandemic. The Matebook is also a little on the expensive side of things.

Performance is fine, although the Matebook does struggle with heavyweight graphics tasks. For most tasks, though – home working, word processing, watching Netflix or Disney+ – it manages perfectly well.

Nice laptop, shame about that webcam.

1 Owner of Dundrum Town Centre to sell prized assets
2 Pilita Clark: Working from home is starting to pall
3 Thousands back petition demanding State aid for Aer Lingus
4 Enlightened working: ‘You Days’ and unlimited paid leave
5 Can a first-time buyer get relief on a buy-to-let home?
Real news has value SUBSCRIBE