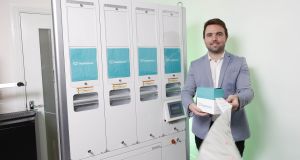 Healthwave founder Shane O’Sullivan: The Pillpod system yields a tearable roll of chronological pill pouches, which come in a pod, ensuring the correct pills are taken at the right time each day. Photograph: Conor McCabe

Pillpods are designed to help increase adherence to medication, increasing compliance from 56 per cent to 81 per cent, according to research cited by Healthwave.

The tearable roll of chronological pill pouches, which come in a pod, ensuring the correct pills are taken at the right time each day with each Pillpods pouch printed with the patient’s information, including the date and time to take the medications.

“Patients routinely forget to take daily medications for asymptomatic conditions while traditional medication packs can make it difficult to know whether a given day’s pill has been taken or not,” said Healthwave founder and pharmacist Shane O’Sullivan.

The system also removes the manual handling of pills by patients and pharmacists, combining automated pill-dispensing robotics with machine-learning, visual-inspection technology. A high-resolution camera can identify a full range of tablets and capsules, which are dispensed by the robotic dispenser. The camera can also detect broken tablets and flag them with the pharmacist.

The system is also faster than a traditional pharmacy, dispensing medications at a rate of one patient a minute.

The company said it would transfer 65 per cent of Healthwave members who are on four or more daily medications to the new system.

The move towards the new system came following Mr O’Sullivan’s visit to a pharmacy in the Netherlands which was also using the technology. The implementation leaves pharmacists free to deal with patients, and also cuts error rates according to a study of the impact of the automated systems on medication error rates in a short-stay geriatric unit.

“The government in the Netherlands now recommends that pharmacists use dispensing machines to increase safety,” Mr O’Sullivan said. “We want to give Irish patients access to the same standards of care and give our pharmacists more time with patients.”

Healthwave currently has more than 15,000 members nationwide, with a pharmacy and hub in Dundrum Shopping Centre.