Entrepreneurs to be spared sugar coating with new start-up conference 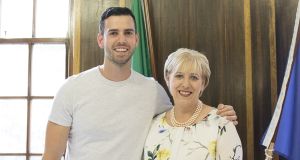 “I’m hosting the event I wish was there for me when I was starting off,” is how entrepreneur Jamie White describes the inaugural Start Summit, a new one-day conference that takes place in Dublin next month.

The Start Summit, which takes place on Saturday, September 15th at Dublin Castle, seeks to educate and motivate budding entrepreneurs with inspiring speeches and helpful workshops. Among the speakers taking part at the event are Voxpro co-founder and chief executive Dan Kiely and Ray Nolan, who leads the ecommerce company xSellco and who also previously co-founded Hostelworld.

“I want to have a highly practical event that covers how to get started in business without all the sugar coating that usually goes with it,” says White, who is behind the conference.

Prior to this, White was behind Youth Nation, an online publisher whose websites collegetimes.com and teentimes.com boasted a combined average weekly social media reach of 100 million people. TeenTimes was purchased by RNDR Media in September 2016 with College Times being acquired shortly after by Balls Media.

White promises a series of workshops that cover the fundamentals of how to set up a business, including covering topics that entrepreneurs are usually too embarrassed to ask about because they feel they should already know.

“I’ve gone to a lot of events myself and a lot of them don’t get to the nitty gritty of what being an entrepreneur is and so that’s why I’ve got people like Ray Nolan speaking who is great at addressing all the misinformation there is about entrepreneurism,’” he says.

Nolan for his part made it clear that is exactly what he plans to do at the event.

“Entrepreneurs are the lifeblood of the economy. I’m delighted to have this opportunity to inspire those who can build real businesses and jobs in Ireland and maybe dispel a myth or too about the glamour and the tedium of doing so,” he said.

Among the other speakers at the Start Summit are Bobby Healy, chief technology officer at CarTrawler, Butler’s Pantry managing director Jacquie Marsh, former BT Young Scientist of the Year and Forbes’ 30 under 30 star, Shane Curran and FoodCloud co-founder and chief executive Aoibheann O’Brien.

The event is capped at 500 attendees. Ticket prices cost €99 and are available from thestartsummit.com