Research shows that the less friendly a robot is, the more people pay attention 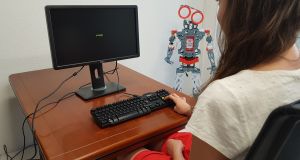 Do people have a raised level of alertness in the presence of potentially threatening robots?

In the near future it is becoming increasingly likely that somewhat-human-like robots will be interacting with us on a regular basis, ranging from caring for the elderly to acting as shopping assistants to consumers. What kinds of personalities should these robots have? It depends on their job, but research shows that the less friendly a robot is, the more a human pays close attention, which might have implications in designing robots to help us with tasks such as remembering to take medication.

Researchers at the University of Clermont Auvergne in France carried out an experiment where human subjects were asked to take a test alone and then asked to chat with one of two robots, one of whom was friendly, the other a bit of a jerk. They were then asked to retake the test, this time with the nasty or nice robot standing there watching them.

Those who took the test with the meanie robot watching them did noticeably better at the test, which was designed to measure attention. Those with the good robot didn’t improve on their previous scores. The authors say one interpretation of the study is that individuals have a raised level of alertness in the presence of potentially threatening robots.