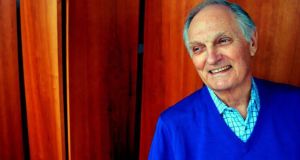 Alan Alda: “And I’m not entering dementia. I’m no more demented than I was before.”

Actor Alan Alda, best known for playing Hawkeye in the TV series M*A*S*H, recently said in an interview that he was diagnosed with Parkinson’s disease three years ago. He added that this has not affected his active lifestyle, which involves taking boxing lessons three times a week, tennis twice a week, some juggling and working on his new podcast Clear+Vivid.

“And I’m not entering dementia. I’m no more demented than I was before,” he quipped with regard to his diagnosis.

Alda, a passionate science communicator, launched Clear+Vivid last month. This roughly 45-minute podcast sees him interviewing celebrities and public intellectuals on topics ranging from the pros and cons of empathy to dealing with bad news like a cancer diagnosis.

It’s worth it alone to listen to Alda’s fantastic voice (which, incidentally, has its own Facebook fan page) that manages to sound comforting while radiating intelligence (No, I didn’t set up the Facebook page). His conversation with comedian Sarah Silverman covers the topics of Twitter hatemongers and learning to not just tolerate but enjoy the company of people you don’t agree with.