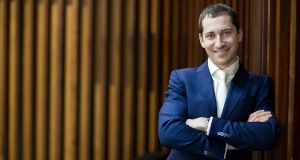 KamaGames, the Dublin-based gaming company, is seeking to raise $25 million (€22 million) in a token sale exploiting blockchain technology and the ethereum cryptocurrency platform.

The firm, the largest European mobile poker operator, said the tokens will be available as a collection of in-game chips sold in a bulk block at the best price possible. Players will then be rewarded for leaving their tokens untouched.

Andrey Kuznetsov, chief executive of KamaGames said the aim of the token sale, which he claims is an industry first, is to reward the Kama’s existing players, help attract a new audience and to drive the expansion of the company into new areas and territories.

The gaming company, which was originally set up in Russia, has seen its valuation jump threefold to at least $500 million since moving to Dublin in 2012, despite financial and regulatory challenges related to EU and US sanctions on Russian companies.

The firm, which focuses on social casino games, is part of what Enterprise Ireland described as “waves” of Russian start-ups, programmers and developers relocating to Ireland due to concerns about recession and the political and legal environment at home.

KamaGames weighed up several jurisdictions and ultimately selected Dublin so the company could be near its biggest clients, Apple and Google, which generate 60 per cent and 30 per cent of its revenue, respectively.

Holders of the KamaGames token, who have a player account, can link their tokens to the account and receive daily bonus chips and other discounts. New players can easily create an account via Pokerist, Kama’s most popular game and the number one grossing app in 101 countries on the App store.

Like many other free-to-play social games, such as Candy Crush and Farmville, it is possible to move through the levels of Pokerist and other Kama games more quickly and access other areas of the game by buying additional chips.

The token will deliver 11 times its original purchase value in virtual chips. Kuznetsov said this number is guaranteed, and can be purchased for either local, conventional currency or via ethereum coin.

The token has a serious limitation in that it can only be used for in-game currency and cannot be exchanged for traditional currency or for cryptocurrencies like bitcoin.

The firm’s revenues grew by 63 per cent last year to $57.2 million from $35 million as the number of daily active users climbed by 36 per cent, with the average revenue per user growing 30 per cent in the same period. Kuznetsov said revenues for the first quarter of this year have soared almost 50 per cent compared to the same quarter in 2017.

“We hope to make $75 million this year and we will hit $100 million if we include the token sale and that takes us to the next level,” he said.

Social casino games are one of the most profitable segments in the mobile games market. The overall market size of mobile and web social casino games reached $3.2 billion last year, an 11 per cent increase on 2016.

Kama has responded to the market’s growth by launching new 2D and 3D games, such as Slots, Omaha Poker, Baccarat and Set Poker, in recent months via its Pokerist app.

The company was founded in 2010 in Vladivostok in Russia’s far east by a games developer who remains its main shareholder and prefers to remain in the background. A year later, when the company had grown to 80-strong, they set up a development office in Moscow due to a shortage of talent in Vladivostok.

The Dublin office on Amiens Street, which has about 20 people, is expanding and is focused on business development, marketing, legal and accounting.

Kama received assistance from the IDA with housing and work permits, but did not require any capital, according to Kuznetsov, who has bought a house in Dublin and plans to apply for citizenship in November.

Kuznetsov said the idea for the token sale was sparked after customers approached the company asking whether they could accept payment in cryptocurrencies.

The firm decided to go the route of setting up a token because a full cryptocurrency would have required a license and it would have been costly and complicated.

“We couldn’t do it nor could our rivals because our main partner Apple doesn’t do it nor does Facebook and our payment provider for the website Xsolla can’t do it,” he said.

Kuznetsov says the company is not in any rush to sell and is seeking to expand into China and India. However, Kama may seek an exit through a sale or a strategic partnership within five years.

Kama has remained self-funded and privately-owned since launching although Kuznetsov admits that could all change after the token sale.

“2018 is shaping up to be our strongest year to date for growth, revenue and new game releases,” said Kuznetsov, who heads a growing company of 250 in Dublin, Moscow, London and Dubai.

“We are not going to launch our own cryptocurrency like bitcoin, but we look to utilise blockchain potential in our business,” he said. “At the same time, we have been thinking about a 20 per cent equity sale in 2019 to private investors via a security token sale and accredited private investors in the US depending on how this sale goes and if there is a positive sentiment on capital markets.”

Republic’s unemployment rate jumps to 16.5% 11:11
Kenmare resources suspends guidance on Covid-19 uncertainty 10:59
Flutter to ask shareholders to take dividend payment in shares 10:50
European stocks pare gains as investors consider economic reboot 10:35
After getting ahead in Covid testing, Berlin now hopes to get ahead in recovery 10:31

1 Lockdown exit: How can Irish economy reopen without big health risks?
2 Why we should be slow to use tracking apps in coronavirus response
3 Republic’s unemployment rate jumps to 16.5%
4 Pandemic payments will ‘significantly’ support incomes – ESRI
5 Amazon fly dedicated aircraft into Belfast to fill online orders
Real news has value SUBSCRIBE