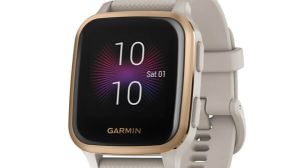 Garmin has given the always-on 1.3-inch display an aluminium frame that gives the Venu SQ more of a premium look.

When you think of Garmin watches, the first thing that usually comes to mind is serious athletes. The devices have a mind-boggling array of information accessible from your wrist, probably a little more than I need if I’m honest. But it is reassuring that should I get the urge to find out what my VO2 max is, it’s available.

But those serious watches also come with a serious price tag and you need to spend a bit of time with them to fully understand all the data they produce. Weeks after setting up the more expensive Fenix 6S Pro, I was still finding options I hadn’t seen before.

Enter the Venu SQ, Garmin’s answer to the Fitbit. The Venu SQ Music is a bit more budget friendly at €252 and its colour touch screen is a little easier to decipher, allowing you to see your health data at a glance.

But it still does a lot. The Venu SQ Music not only monitors your activity, heart rate, respiration rate and sleep, it also has built-in GPS, measures your stress levels and links to your Spotify, Deezer or Amazon Music account for offline music while you work out. That means the phone can stay at home while you go for a run and completely switch off, something that is an increasingly attractive prospect at the moment.

Aesthetically, it is a bit on the chunkier side of things with an angular watch face. Garmin has given the always-on 1.3-inch display an aluminium frame – in this case rose gold – that gives the Venu SQ more of a premium look. It’s a bit like the Apple Watch but less expensive.

It comes with Gorilla Glass too, though experience has taught me that the display will inevitably pick up scratches just from everyday use. It’s so light though that it is quite easy to forget you are wearing it.

The display is touch sensitive, unlike some of Garmin’s other devices, and there are two buttons on the side: one to access your favourite activities and one that can be used to access the main menu. It’s not the most intuitive system: I’m used to one button for the menu, another for selecting or going back. The app will walk you through how to navigate the system, however.

The watch tracks quite a bit. There’s your heart rate, which is constantly monitored on your wrist, your “body battery” (which monitors your energy levels throughout the day) and your stress levels, which were fairly spot on during my testing. Watch as your stress level starts to climb as deadlines draw near, which in itself leads to increased stress levels. It’s a vicious, yet fascinating, circle.

Your blood oxygen level is monitored at intervals throughout the day and at night while you sleep. Respiration rate is also tracked and can be viewed on the Garmin Connect app. You may never want or need to know any of this but it all feeds into your fitness monitoring.

Because Garmin includes GPS on the watch, carrying your phone with you while you work out isn’t necessary. The watch makes your phone even more redundant by supporting offline music playlists from your streaming music services – as long as those services are Spotify, Deezer or Amazon Music.

You could also add your own music files to the watch but that is becoming an increasingly rare thing to have, anecdotally of course. Accessing the music will require a decent set of Bluetooth headphones or earbuds but connecting them to the watch will only take a couple of seconds.

Because the Venu SQ has a touch screen, you’d expect the battery life to be significantly less impressive than its siblings such as the Fenix 6S Pro or the Garmin Instinct. Depending on what you are asking of the watch, you’ll have varying experiences. Using GPS will wind down the battery quicker and using GPS plus music services will speed up that drain.

But unless you are going for several hours-long runs with your thoughts and a playlist, you’ll get a few days out of each full charge with mixed use – a bit of GPS here, some walking with Spotify there – and you aren’t quite as dependent on your power cord as I feared the Venu would be.

Lightweight both physically and in its impact on your pocket, the Garmin Venu SQ Music offers a lot in a small package. There are plenty of workouts to choose from, you can sign up for Garmin Coach through the app and follow its coached training plans for 5km runs or marathons.

The Venu SQ Music has one great thing in its corner: the ability to play your music offline.

It’s not as sleek as some of the other smartwatches around, although it’s not a hideous proposition either. A touch bigger than I’d like but nothing too off putting. The menu navigation system, on the other hand, could do with work.

It works equally well with both Apple and Android devices once it is connected, although I had trouble connecting it to the iPhone while the Android device connected in seconds. Once you are set up, you can choose from a limited number of apps in the Garmin Connect IQ Store. If your bank supports it, you can add your card to the Garmin Pay wallet and use your watch to pay for a coffee or newspaper after your run.

A lightweight tracker that is ideal for Android music-lovers.