Cordless devices another move for the company towards battery power 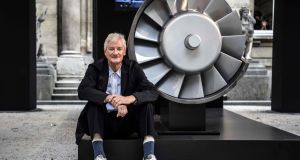 Founder James Dyson: the majority of the company’s sales last year were in the cordless category. Photograph: Christophe Archambault / AFP

Dyson has increased its stakes in the personal care market, with the launch of a new hair straightener, the Dyson Corrale, and released the new generation of its robot vacuum cleaner in Ireland and Britain.

The Corrale claims to offer better performance and style with less hair damage. Key to this are the flexible plates made from manganese copper alloy and flex to mould around hair, applying tension more evenly.

The device also has intelligent heat control technology, with sensors that measure temperature 100 times a second and communicates with a microprocessor that controls the heating system delivering precise, accurate heat.

“We have been studying the science of hair over the last five or six years and hair damage is a very serious issue,” said James Dyson. “So we started looking at a way of straightening hair or styling hair with hair irons which didn’t use a lot of heat.”

The new cordless device is another Dyson move towards battery power. Two years ago, Dyson took a gamble on the sector, saying the company would no longer develop its traditional corded vacuum cleaners, but would concentrate on the cordless sector instead.

Mr Dyson said the move had paid off for the company, with the majority of its sales last year in the cordless category.

Another beneficiary of that focus is the Dyson 360 Heurist robot vacuum, which the company claims has 20 per cent more suction than its predecessor, and more memory, has been on sale in a number of other markets overseas since last year.

The new cleaner comes with an intelligent vision that allows it to map your home room by room. When connected to the Dyson Link app, it means users can tell the machine not to clean certain rooms.

The device also has more intelligent sensors to stop it colliding with items around your home, and a light to help it continue to clean in the dark – or under furniture such as beds.

Mr Dyson said the sales of the original robot, the Dyson 360, had gone well. “We’ve actually had a shortage of motors for it, so we haven’t really been pushing it because we didn’t have enough of them,” he said. “Navigation by vision system, as opposed to sensors is absolutely the way forward, and it’s a much more accurate way of doing it.”

Dyson’s selling point for the robot has always been that it delivers the same performance as a full-size vacuum, something that is aided by the advances in the motor technology Dyson has invested in and the battery technology.

“We’re never happy, we’re always dissatisfied,” he said. “That’s why we’re putting so much into developing new solid state battery technology. We think it’s going to be really, really important particularly if you make batteries lighter, more powerful, and less environmentally damaging. I think having having a battery operated appliance is so much better than a cable. And it enables products that just simply weren’t possible before.”

That battery technology could be applied to other sectors that Dyson has yet to enter. The company last year stepped away from its electric car project after deciding it could not yield a commercially viable product, despite working on a “fantastic car”.

“I think with any big project like that you always learn something,” Mr Dyson said. “I can’t say a lot that we’ve learned can be applied to our other technology and other products, except that it added a greater emphasis to the battery development. But I think what’s been great actually, is that a lot of the car engineers that came to work for us on that project transferred over to our home division, the other products that we’re developing. So in a way, we’ve got more from the people that we have from the technology.”