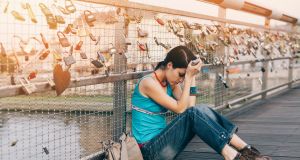 Employer wellness apps are predicted to be worth €17.9 billion within five years. Photograph: Getty Images

The market for software aimed at enhancing or replacing traditional therapies for conditions such as diabetes, weight loss and post-traumatic stress disorder is set to be worth up to $32 billion (€28.6 billion) within five years, according to new research from Juniper.

That will mean a rapid rate of expansion for the sector, which will be worth an estimated $2.2 billion (€1.9 billion) this year.

The report, which forecast the fortunes of the sector between now and 2024, said diabetes and weight loss would offer the biggest potential application for the new technology, amounting to an estimated $19 billion (€17 billion) by 2024.

However, treatments for conditions such as chronic obstructive pulmonary disorder would also contribute to this figure, as would the use of virtual reality for post-traumatic stress disorder, and the use of computer games for developmental disorders.

The majority of the revenue generated by the apps is expected to come from employers in the form of direct payments, at least until 2021. The public health interest case for these therapies will be confined to a handful of markets, Juniper said.

The popularity of wellness apps is also expected to rise, with the number of consumer apps in use to reach more than 870 million by 2024. That could generate up to $5 billion (€4.4 billion) in revenue, representing another opportunity for companies operating in this sector.

Employer wellness apps are predicted to be worth $20 billion (€17.9 billion) in the same period.

“While our research shows that employee schemes typically have a lower revenue per user than consumer payers, they will pay for longer,” remarked research author James Moar. “They also do not compete directly with free wellness apps, a constant problem for the B2C wellness industry, which has also constrained B2C digital therapeutics.”

1 High Court appoints interim examiner to Compu b parent company
2 Second Covid-19 outbreak and no-deal Brexit an appalling vista
3 Ireland faces 'deep downturn' this year and may not rebound until 2024 if there is a second wave
4 System agreed for Irish goods to skip checks on UK trade
5 How much do Irish people earn? And what will Covid-19 do to our wages?
Real news has value SUBSCRIBE