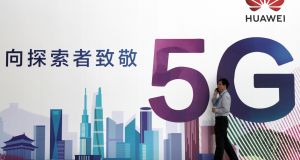 Two of Britain’s largest mobile phone operators have pulled Huawei’s phones from their 5G networks, joining other global telecoms groups in dropping launch plans after the Chinese group was hit by a US export ban that could stop it using Google’s Android operating system.

BT subsidiary EE had planned to offer Huawei phones as part of its launch on Wednesday of the UK’s first 5G network, but decided to “pause” this because of uncertainty after the Chinese group was included on a blacklist that forbids US companies to supply it with technology. This could stop Google from providing future versions of its Android system to Huawei.

Vodafone also said it would suspend Huawei’s Mate X phone from its 5G line-up. Vodafone had planned to launch the handset in the summer on its 5G network, but a spokesman said on Wednesday that “Huawei’s 5G handset is yet to receive the necessary certifications”.

Two of Japan’s largest mobile phone carriers also said they would delay the launch of a new smartphone by Huawei as global mobile operators scrambled to deal with the proposed US export restrictions on the Chinese telecoms equipment maker.

The decision on Wednesday by SoftBank and KDDI will affect the Huawei P30 Lite smartphone, which was due to go on sale in Japan on Friday. NTT DoCoMo, Japan’s largest carrier, said it was also considering cancelling pre-orders for the Huawei handset.

Marc Allera, chief executive of EE, said the company had “paused” the launch of Huawei’s 5G phones because it did not have the “surety [sic] of service” it needed to offer long-term contracts. “We’ve had to hold that back,” he said.

The company will, however, continue to use Huawei, alongside Ericsson, for the radio equipment for its 5G network despite the political debate around the use of the Chinese company’s equipment and its supply chain issues following the move by US authorities to put it on to the entity list.

Mr Allera said EE has tested its 5G network using Huawei technology and has had “no indications” from the British government to change course. He said the supply chain restrictions were a concern but that the UK would not benefit from a lengthy delay to 5G launches while the situation is being resolved.

“There are so many scenarios and we don’t have any clarity. But we can’t stand still,” he said. “Nothing is crystal clear but we have to work within that ambiguity.”

The debate around Huawei has overshadowed the launch of 5G services in the UK as networks have lobbied the government not to ban the Chinese company from 5G network builds.

EE has battled to be the first to launch 5G networks against Vodafone, which goes live in July. The initial version of 5G will be the equivalent of an enhanced 4G network offering speeds 10 times faster than today’s smartphones. Its full 5G network will be launched in 2022 with ultra-low latency services available in 2023. – The Financial Times Limited 2019