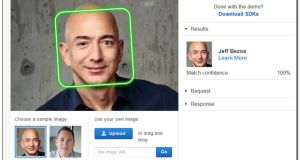 An image provided by Amazon shows on the company’s website how its Rekognition software works with chief executive Jeff Bezos. Facial recognition software is coming under increasing scrutiny from civil liberties groups and lawmakers.

Facial recognition software is coming under increasing scrutiny from civil liberties groups and lawmakers. Now Amazon, one of the most visible purveyors of the technology, is facing pressure from another corner as well: its own shareholders.

As part of Amazon’s annual meeting in Seattle on Wednesday, investors will vote on whether the tech giant’s aggressive push to spread the surveillance software threatens civil rights – and, as a consequence, the company’s reputation and profits.

Shareholders have introduced two proposals on facial recognition for a vote. One asks the company to prohibit sales of its facial recognition system, called Amazon Rekognition, to government agencies, unless its board concludes that the technology does not facilitate human rights violations. The other asks the company to commission an independent report examining the extent to which Rekognition may threaten civil, human and privacy rights, and the company’s finances.

Amazon fought particularly hard to prevent the votes on facial surveillance. In a letter to the Securities and Exchange Commission in January, the company said that it was not aware of any reported misuse of Rekognition by law enforcement customers. It also argued that the technology did not present a financial risk because it was just one of the more than 165 services Amazon offered.

“The proposals raise only conjecture and speculation about possible risks that might arise” from clients misusing the technology, lawyers for Amazon wrote in the letter.

The agency, the regulator for listed companies, disagreed, and ultimately requiring Amazon to allow the facial surveillance resolutions to proceed.

“This piece of equipment that Amazon has fostered and developed and is really propagating at this point doesn’t seem to us to be in the best interest of the common good,” said Sister Pat Mahoney, a member of the Sisters of St. Joseph, a religious community in Brentwood, New York, that is an Amazon investor and introduced the proposed sales ban. “Facial recognition all over the place just makes everyone live in a police state.”

The proposals are no-binding, meaning they do not require the company to take action, even if they receive a majority vote. But they add to the growing resistance to facial surveillance technology by elected officials, civil liberties groups and even some Amazon employees.

Last week, San Francisco banned the use of facial surveillance technology by police and other city agencies. Oakland, California, and Somerville, Massachusetts, near Boston, are considering similar bans. Earlier this year, state lawmakers in Massachusetts and California introduced bills that would restrict its use by government agencies. On Wednesday, the House Committee on Oversight and Reform will hold a hearing on the civil rights implications of facial surveillance.

The Amazon shareholder proposals also highlight the rise of activism among investors in the country’s top tech companies. Last year, investors successfully pressured Apple to create stronger parental controls for iPhones, warning that the device could be too compelling for young children. In the coming weeks, shareholders of Facebook, Twitter and Alphabet will vote on issues related to election interference, hate speech, disinformation and the creation of censored services for China.

“We’re not Luddites, we’re not anti-technology,” said Michael Connor, executive director of Open MIC, a nonprofit group that works with activist investors in the tech sector and helped draft the facial surveillance proposals with Amazon shareholders. “But we do think all these technologies have to be handled and introduced in a responsible way.”

Amazon employees who are stockholders have also introduced an AGM proposal on climate change, pushing the company to make firm commitments to reduce its carbon footprint.

In a statement in response to a reporter’s questions, Amazon said it offered clear guidelines on using Rekognition for public safety – including a recommendation that law enforcement agencies have humans review any possible facial matches suggested by its system. The company added that its customers had used Rekognition for beneficial purposes, including identifying more than 3,000 victims of human trafficking.

“We have not seen law enforcement agencies use Amazon Rekognition to infringe on citizens’ civil liberties,” the Amazon statement said. (The New York Times used Amazon Rekognition last year to help identify guests at the royal wedding of Prince Harry and Meghan Markle. ) Amazon is becoming a national magnet for mounting opposition to facial surveillance – a technology that may be used to identify and track people at a distance without their knowledge or consent. Facial recognition uses artificial intelligence to scan a photo of an unknown person. The software then compares the facial template of the unknown person with a database of templates of known people and, if the templates are very similar, may suggest a name or match.

Proponents of the technology argue that such systems help law enforcement agencies more easily identify crime suspects and missing children. Civil liberties groups warn that the technology could easily be misused to disproportionately pursue immigrants, people of colour and protesters, infringing on their rights to free speech and movement.

Other companies have long sold facial surveillance to law enforcement agencies, but Amazon has differentiated itself by, in part, playing down warnings about the technology.

Last year, Google said that it would refrain from offering facial recognition for general purposes until it had worked through the policy implications. This year, Brad Smith, the president of Microsoft, said his company had decided not to sell the surveillance technology to a police department seeking to freely use it on the general public.

Amazon, in contrast, recently pitched its facial recognition services to US Immigration and Customs Enforcement, according to company emails obtained under open records law by the Project on Government Oversight, a nonprofit group based in Washington.

Institutional Shareholder Services and Glass Lewis, two prominent firms that advise many large institutional investors, each recommended this month that shareholders vote in favor of the resolution calling for an outside report on Rekognition’s risks.

In its analysis, Institutional Shareholder Services wrote that Amazon “may be lagging its peers” because it has “not developed rules for bidding on government contracts, has not formed an artificial intelligence ethics committee and has not announced partnerships with civil liberties organisations”.

Industry analysts said there was little chance that the proposal to ban Rekognition would gain traction among shareholders. But at least a few large institutional investors – including the New York City Pension Funds, which have about $1 billion in Amazon holdings – plan to vote in favour of the proposal for an independent report on facial surveillance.

“We want Amazon’s board to oversee and disclose how Amazon is addressing the significant risks posed by the sale of facial recognition technology,” said Scott Stringer, the New York City comptroller and the investment adviser to the funds. He described the software as “a product that could lead to violations of human and civil rights around the world, especially if sold to authoritarian governments.”

Even so, that may not sway Amazon, whose largest investor prefers a wait-and-see approach to the risks of emerging technologies.

“Technologies always are two-sided. There are ways they can be misused,” Jeff Bezos, Amazon’s chief executive, said at a Wired tech conference last autumn, adding: “That’s always been the case and we will figure it out. The last thing I’d ever want to do is stop the progress of new technologies, even when they are dual use.” – New York Times