Yahoo price drops by $350m in wake of cyber-hack 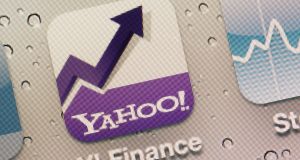 Verizon Communications will acquire Yahoo’s internet properties at a $350 million (€332 million) discount after revelations of security breaches at the web company.

The acquisition, now valued at $4.48 billion in cash, is expected to close in the second quarter, the companies said in a statement on Tuesday.

In addition to the price cut, Verizon and the entity that remains of Yahoo after the deal, to be renamed Altaba, will share any ongoing legal responsibilities related to the breaches.

Last December it emerged cyber-thieves had, in 2013, siphoned information including users’ email addresses, scrambled account passwords and dates of birth.

The announcement followed news the previous September of a 2014 breach that affected at least 500 million customer accounts.

The latest development brings Verizon another step closer to adding Yahoo and its billion users as it tries to expand beyond a maturing wireless and landline business into mobile media and advertising ventures.

The company is also exploring other acquisitions at a time when regulations are loosening and broader MandA strategies are taking hold under a deal-friendly President Donald Trump.

“It provides protections for both sides and delivers a clear path to close the transaction in the second quarter,” she said.

Verizon executives had some misgivings about the deal in recent months, frustrated by a lack of progress in investigating the security breaches, Bloomberg reported in October.

Still, the companies have been working on combination plans, including more than 20 integration tracks to bring Yahoo’s business into the fold.

Shares of Verizon climbed 0.4 percent to $49.39 at 9:00 a.m. in New York before the official market open. Yahoo, based in Sunnyvale, California, rose 0.7 percent to $45.43. Yahoo shareholders would have to approve a revised deal.