No special deal possible to stop the return of Border controls

The Taoiseach Enda Kenny has met with British prime minister Theresa May in Dublin. The two leaders discussed the implications of Brexit for Northern Ireland, the border and economic ties between Ireland and the UK. Video: MerrionStreet.ie 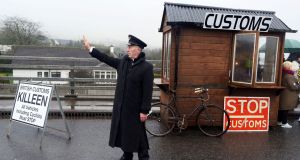 There have been some suggestions in Ireland, since the Brexit vote of June 23rd, to the effect that Ireland and the UK ought to be allowed to cut a special deal to avoid the need for a customs Border within Ireland. These interventions often seem to be ignorant of the basics of trade policy. Among the key points are the distinction between free trade areas and customs unions.

Imagine that Britain and the European Union form a free trade area. The UK sets a 20 per cent tariff on Japanese cars while the EU’s tariff is 10 per cent. Without border controls, everyone would import Japanese cars into the UK via the EU, thus undermining the UK’s trade policy.

These interventions often seem to be ignorant of the basics of trade policy. Among the key points are the distinction between free trade areas and customs unions.

Similarly, imagine that the UK does a trade deal with the US and agrees to admit American beef duty free, while the EU retains a 15 per cent tariff. Again, absent border controls, everyone would import US beef into the EU via the UK, thus undermining EU trade policy.

So long as the UK and EU set different tariffs, therefore, there have to be border controls between them to ensure that Japanese cars and US beef are not freely traded alongside various products that are entitled to be freely traded. And it is precisely because such border controls are costly that the then EEC decided, all the way back in the 1950s, to set up a customs union rather than a mere free trade area.

There are also other benefits to having a customs union. For example, the EU 27 is a far more formidable negotiator than the UK on its own, allowing the bloc to strike more favourable trade deals with third parties.

The EU’s common external tariff is not a source of barriers: its whole point is to do away with barriers. That is why the provisions in the treaties regarding the customs union appear under the general heading “Free movement of goods”. And so the fact that both Ireland and Northern Ireland were in the same customs union from 1973 onwards, and in the same single market from 1993, has been a great thing for this country.

As long as Ireland remains a member of the EU, it remains a part of its customs union. There is zero ambiguity on this point. The treaties state: “The Union shall comprise a customs union which shall cover all trade in goods and which shall involve the prohibition between Member States of customs duties on imports and exports and of all charges having equivalent effect, and the adoption of a common customs tariff in their relations with third countries.”

No wiggle room here, as there is for example in some of the provisions regarding monetary union, and for good reason: the customs union has been the uncontested heart of the European project since the 1950s. As long as the North is outside the EU and its customs union and the Republic is inside, there will have to be Border controls between North and South to rule out trade diversion.

As long as Ireland remains a member of the EU, it remains a part of its customs union. There is zero ambiguity on this point.

We all hope that these will be as unobtrusive as possible – if you like, that they will not be “hard”. Technology can surely help. Perhaps there can be customs posts for lorries away from the Border, with cars passing freely. But customs controls of some sort there will have to be.

Even if it were mysteriously possible for Ireland not to enforce the common external tariff and remain inside the EU, if we magically got the right to not check goods coming across the Border, what would be the result? Since Ireland would be de facto outside the customs union, all trade between Ireland and the EU26 would necessarily be subject to costly border and customs formalities, so as to rule out trade deflection. The basis for our prosperity – the costless access to the single market – would be destroyed.

The return of the Border, however soft, is appalling and dangerous. I understand people wish Britain had not placed us in this position, but it has (Britain, mark you, not the EU). And closing our eyes, sticking our fingers in our ears, and hoping that a fairy godmother will magic our problems away will not help.

It is logically coherent, if lunatic, to argue that Ireland should quit the EU and join the UK customs union. (Leaving the EU would on its own obviously not suffice to avoid a North-South border: our exit from the EU would have to be of the red, white, and blue variety.)

It is also logically coherent to argue that Northern Ireland should remain within the EU, and I wish it would. That seems like something worth arguing for. But it is logically incoherent to argue that if we remain in the EU and its customs union, and the North leaves both, there can be some special deal that will avoid the need for a customs frontier on the island.

Those who say Ireland should leave the EU know they are in a small minority. Many will not come out and argue for their position particularly strongly for fear of being laughed out of court. The evidence that our prosperity is based on EU membership is overwhelming. Still, expect them, in the months and years ahead, to claim that the return of a customs frontier somehow shows that “the EU” has let Ireland down.

The Brexit campaign shows that such dishonesty can pay. Which is why it is so important that everyone understand that if the North leaves the EU and its customs union, and we remain inside it, there is nothing that the EU or anyone else can do to prevent the return of such a frontier.

Kevin O’Rourke is the Chichele professor of economic history at the University of Oxford.

1 How can I view my dead brother’s will if I’m not the executor?
2 Provisional liquidator appointed to Dublin engineering firm
3 Kerry’s Chinese sales set for 30% hit from coronavirus
4 Bursting of Tesla bubble a case of ‘not if, but when’
5 Bank of Ireland staff in line for 2.95% pay increase
6 Finance Ireland plans stock market flotation in May
7 US reiterates opposition to Huawei equipment being used for Irish 5G
8 Must you pay a price for ethical investment?
9 Irish Reits would benefit from property funds overhaul, Davy says
10 Finance Ireland’s IPO, Huawei and Irish 5G, and pay rises at Bank of Ireland
Real news has value SUBSCRIBE