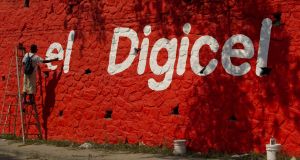 Digicel creditors have rejected an offer from the Denis O’Brien-controlled telecoms operator to switch them to longer term bonds in a bid to ease its $6.7 billion (€5.7 billion) debt burden.

Mr O’Brien’s group recently offered to exchange $2 billion of its bonds, due to be repaid in September 2020, for debt due instead in 2022, at the same 8.25 per cent interest rate.

In addition, Digicel, which operates networks in the Caribbean and South Pacific, said it would swap $1 billion of bonds, due to be repaid at 7.125 per cent interest in 2022 for debt that would instead fall due in 2024 at 8.25 per cent interest.

Akin Gump, a US law firm acting for Digicel bondholders, told the telecoms group on Monday that the terms offered to those creditors were “unacceptable”.

The response ups the pressure on Digicel, which owes creditors $6.7 billion, but which recently reported a 2 per cent fall in revenues during the three months ended June 30th.

In a statement, Akin Gump said the holders of more than 60 per cent of the $3 billion that Digicel owes these creditors have agreed not to tender their bonds to the telecoms company in response to its offer.

The lawyers said a committee of bondholders had told Digicel of this “lock-up” agreement and said they were willing to enter talks on an alternative proposal if the company withdraws the original offer or extends its cut-off and early acceptance deadlines.

In its original proposal on August 31st, Digicel offered the full amount due and a 5 per cent “early tender premium” to all those who accepted by 5pm New York time on September 14th, and 95 per cent to those who subscribed by the cut-off on September 28th.

A week later it extended both deadlines to 11:59pm New York time on September 28th, which is this coming Friday. The company confirmed then that it had “entered into constructive discussions with an ad hoc group” of bondholders regarding its offer.

Akin Gump said that following calls with holders of $2.8 billion of Digicel’s debt, seven financial institutions, owed more than half the $3 billion between them, formed an ad hoc steering committee representing the creditors involved.

The committee has asked Akin Gump to request that other Digicel bondholders also refuse the company’s offer on its current terms, which would further increase the sizeable majority of creditors opposed to it.

Digicel has been struggling with falling earnings in recent years as currency weakness, economic reverses and declining voice and data revenues hit its main markets.

Ratings agency Fitch, which assesses the ability of companies and organisations to repay their debts, recently downgraded Digicel’s creditworthiness, citing concerns about the group’s ability to refinance debt due in the next five years. Digicel did not comment on Akin Gump’s statement yesterday.