Dell gives investors a look at its post-private future 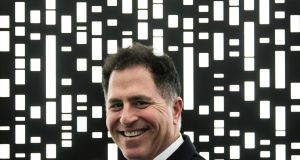 At stake is Michael Dell’s goal of streamlining his debt-laden technology empire, while giving the company the ability to use equity to finance future acquisitions.

Dell Technologies gave investors a deeper look into its financials as it steps up efforts to win support for a plan to take the company public.

Dell expects its revenue to increase about 9.5 per cent to $87.5 billion (€75.5 billion) in fiscal 2019, according to a proxy statement filed on Monday. That’s the midpoint of a projected range, compared with $79.9 billion in sales a year earlier. Dell said its total earnings before interest, taxation, depreciation and amortisation (Ebitda) are expected to increase 18 per cent to $9.7 billion, up from $8.2 billion.

Both revenue and Ebitda metrics include financial benefits from Dell’s stake in software maker VMware Inc.

The much-anticipated proxy statement includes background on how the deal came to be and financial projections through fiscal 2023 – the furthest-reaching guidance that Dell has given since it was taken private in 2013. The information is key to making the case for its unusual return to the public markets by buying out a tracking stock linked to VMware.

After initial meetings with the company, skepticism among investors had been mounting as to how Dell arrived at the offer price of $109 a share in cash and Dell Class C stock that will be traded for the tracking stock.

For some top holders of the tracking stock, known as DVMT, the share component has been a sticking point. The offer values Dell’s Class C shares at $79.77, leaving investors wondering how those shares jumped 140 per cent in value from $33.17 apiece in November, as disclosed in a May proxy filing, to July 2nd when the deal was announced.

Investors, including activists Carl Icahn and Elliott Management, have been waiting for additional details on the process they expected to be revealed in the proxy filing. At stake is Michael Dell’s goal of streamlining his debt-laden technology empire, while giving the company the ability to use equity to finance future acquisitions.

Investors have been anxious to see how Dell is projecting its financial performance because the numbers are used to value both the company and the deal price. For example, its guidance for fiscal 2019 total revenue increased to a range of $86.5 billion to $88.5 billion, up from an earlier estimate of $82.7 billion, according to the filing.

Dell re-evaluated the projections after its fiscal first quarter performance exceeded management’s expectations, according to the filing. The company said it also included changes in accounting standards related to items such as revenue recognition and cash flow statements. – Bloomberg

1 Avoca warns of redundancies due to coronavirus
2 Coronavirus spreads to sandwich king
3 McGann stepping down at troubled Aryzta
4 Ufurnish: ‘It’s like Skyscanner, but for furniture’
5 Fortnite maker Epic goes to war with Apple over App Store ‘monopoly’
Real news has value SUBSCRIBE