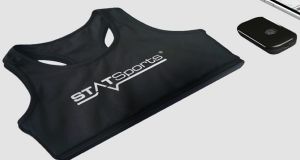 The consumer version of the product will cost €279.99

STATsports, the Newry-headquartered sports technology company that scored a £1 billion deal stateside earlier this year, has launched a new performance monitoring device for the consumer market.

The Apex Athlete Series allows amateur athletes to use the same technology as that worn by soccer starts such as Ronaldo, Neymar and Pogba to track their performance.

The device is worn in a vest and positioned between the shoulder blades during training and matches. It measures and analyses physical attributes of players and can provide feedback on metrics such as distance and speed, as well as levels of fatigue and injury risk.

The launch of the consumer product, which retails for €279.99, has been described as a “game changer” by STATsports chief commercial officer Sean O’Connor.

“Using the same technology relied upon to drive peak performance by the best athletes and teams in the world, the Apex Athlete device is a powerful new tool for players with an eye to compete at their highest level,” he said.

“Never before has an individual player had the ability to monitor and measure their performance with tangible datapoints, developing important individual benchmarks along the way. This data can be used to compare performance benchmarks by position with national standards, as well as those of top National Collegiate Athletic Association players,” he added.

STATsports, which was founded by Mr O’Connor and Alan Clarke in 2007, supplies its technology to a number of leading European soccer clubs including Liverpool, Arsenal, Manchester City, Manchester United, Barcelona and Juventus.

In addition, the company’s monitoring devices are used by the Irish Rugby Football Union (IRFU) and all four Irish rugby provinces, as well as teams playing across GAA, American football, hockey and basketball.

The company secured a five-year contract valued at £1 billion with the US Soccer Federation in late March in what is believed to be the biggest contract ever to be signed in the elite sports wearables market.

The deal will see millions of players in the US using its monitoring devices to aid performance on the pitch.