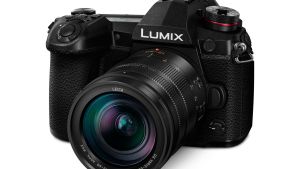 I’m aware that the whole idea of carrying a separate camera is rapidly being viewed in some quarters as a quaint habit, an oddity that now marks people out as different in the same way that using your phone to take photos used to be a novelty. Although in the latter case, it was a novelty that would inevitably end with some grainy photographs of your important family occasion, complete with bad colour and motion blur because someone blinked. Camera phones used to be really bad.

More traditional cameras don’t usually suffer from that particular affliction, but they do have the disadvantage of being something else to remember to carry. If they’re going to keep what’s left of their territory, they have to do something good to make it worth our while.

The Panasonic Lumix G9 steps up to that challenge. The camera offers an easy way to capture high-quality stills and video, with up to 6K resolution, but without blinding you with a 400-page instruction manual. You can pick it up, turn it on and and starting shooting images straight away – provided you remember to charge the battery fully, but more on that later.

The Lumix G9 may look like a digital SLR, with its chunky body and swappable lenses. But look a bit closer. This is one of the new range of mirrorless cameras that are increasingly catching up to DSLRs. Losing the mirror makes it quieter than a DSLR and lighter, and, even with the chunkier frame on the G9, it’s still a bit smaller than most of the DSLRs out there.

There’s an array of buttons and dials that control everything from white balance and shooting mode to auto focus and the electronic viewfinder. Don’t get too intimidated, though. If you are a total beginner to this, you can set the dial to Intelligent Auto and let the camera do all the work.

Its sensors will automatically choose the best settings for the subject and lighting conditions. If things are a little too dim, the improvements that Panasonic has made to the image stabilising systems will really come to the fore. The five-axis body image stabiliser and the two-axis optical image stabiliser work in tandem, so not only do night shots suffer less shake, but one-handed shooting is also possible. There are limits to this, obviously, but, in the general run of things, shots are improved even in less-than-ideal circumstances.

You have options while shooting. The touchscreen on the back also functions as a viewfinder, unless you put the camera up to your eye. Then the sensor near the eye-cup shuts the screen off and kicks the electronic viewfinder into life.

The touchscreen comes in handy for a few things. First off, you can use it to line up shots with awkward angles. It also allows you to use touch to take photos. That can be handy because the regular shutter button is really sensitive. I accidentally took 40 photographs of my desk and computer while trying to do the usual half-press to focus, wondering why nothing was happening. Plus another 50 of the floor. They were perfectly focused and clear, bright photos, but not exactly what I was going for.

Also, it’s really silent. This isn’t my first mirrorless camera, but I’m not sure what I was expecting. Some sort of indication that a photograph had been taken, maybe. On a DSLR you get that clunk from the mirror. But the G9 is, as mentioned, mirrorless. The sounds were turned off on the camera when I got it, which meant no beeps to alert me that I’d even taken a photo – or anyone else for that matter. It makes it a good choice for wildlife photography. Basically, if you want to silently stalk something – or, more creepily, someone – this camera is perfect.

If you want something that’s easy to pick and use, you can’t go wrong with the Lumix G9. Don’t be intimidated by the numerous options on those dials: simply set it to intelligent auto mode and you can snap away.

Image quality is great, as is video. I only used the 6k option a few times – it eats into your storage space, so you’d easily power through the two memory cards once you get going – but it was hard to get a bad shot with Intelligent Auto activated. Plus if you prefer more control

That over-sensitive shutter button takes a little bit of getting used to. Prepare to fish through multiple accidental photos to get your

This doesn’t come in at the budget end of the market, but that’s not necessarily a bad thing in itself. Unless you’re a serious hobbyist, though, this camera’s price tag will be a little too much.

It charges either through the dedicated cradle for the battery, or by plugging it in with the USB cable. A word of caution: it comes with a USB 3.0 cable, so don’t lose it. Yes, you can still hook it up with a micro USB cable, but if you are transferring images off the camera, it won’t be as fast.

Panasonic’s mirrorless compact systems are worth a second look if you want to step up the photography a notch or two.

1 Should I switch bank now with Ulster Bank at risk of closing?
2 Tick all the right boxes when it comes to your house insurance
3 Will brother’s widow get half of our parents’ estate when they die?
4 Belfast mailbox address used by account holder in Russian money-laundering scheme
5 Aldi empire wracked by family feud
Real news has value SUBSCRIBE