Google ‘welcome’ to return to China - if it complies 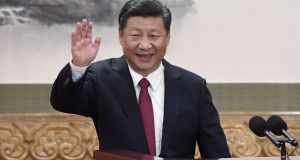 Chinese president Xi Jinping waving at the Great Hall of the People in Beijing.

Google, the world’s biggest search engine, is welcome to return to China as long as it complies with the nation’s laws and right to control the internet within its borders, the People’s Daily said.

The opinion piece in the state-run newspaper said the Alphabet unit’s 2010 withdrawal from China, when it complained about hacking and censorship, was a mistake that caused it to miss out on opportunities.

It also made Google a politicised brand, a “tragedy” for the company, the newspaper said.

Google is looking at ways to re-enter China, home to the biggest pool of internet users, through a search app that complies with Chinese censorship as well as partnerships with local companies, people familiar with the matter have said.

After withdrawing, most of its services were blocked in the country. News of a potential return has been met with resistance from employees and criticism from human rights advocates and lawmakers.

“The decision to exit the Chinese market was a huge blunder, which made the company miss golden chances in the mainland’s internet development,” the flagship newspaper of the Communist Party said.

“Google is welcome to return to the mainland, but it’s a prerequisite that it must comply with the requirements of the law.”

The story was posted on the People’s Daily website as well as its page on Facebook, a platform that is similarly blocked in the country.

The commentary reflects China’s long-held line that all foreign companies wishing to offer services in the country must abide by local standards.

These have run the gamut from news of protests to the cartoon character Winnie the Pooh after it was compared to China’s president Xi Jinping. - Bloomberg

1 Michael O’Leary is the boss you want to lead an airline out of crisis
2 Online shopping makes town centre jobs unviable, says Next boss
3 Fortnite owner signs multimillion deal to buy Irish ‘kidtech’ firm
4 European commission to appeal against €14.3bn Apple tax ruling
5 Ireland is in danger of losing the woods for the trees on emissions reduction
Real news has value SUBSCRIBE