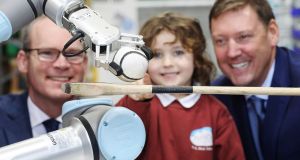 A distributor of industrial maintenance and automation products formally opened a new 6,0000sq ft facility in Limerick on Friday following a €500,000 investment.

Reliance, headquartered in Cork, is the Irish distribution partner for Universal Robots and expanded its floor space in Limerick tenfold after moving to a new location to meet growing demand.

“Reliance has set the standard for what everyone wants to reach and surpass. Because of Brexit the Irish economy will look towards automation companies such as Reliance for guidance,” said Tánaiste and Minister for Foreign Affairs Simon Coveney, who officially opened the new development.

The business, which began trading out of its first branch in Dublin almost 95 years ago, stocks a range of mechanical, electrical and agricultural products.

It sells to a variety of companies including bakeries and meat plants and is active in sectors like transport, renewables, agriculture and bio-medical.

Reliance opened its new facility having agreed to distribute products for Universal Robots, a Danish manufacturer of “collaborative robot arms”.

The collaborative robots were on hand at the formal opening to cut a ribbon with Mr Coveney and cut a pizza into slices. The robots assist businesses to carry out repetitive tasks and free up employees for other roles.

Speaking about the partnership with Universal Robots, the company’s managing director, Peter Creighton, said: “It is our goal to be the leader to identify, learn about, and introduce these latest technologies as they evolve to continually help our customers to compete and grow.”

Founded by Horace Rhodes Kenworthy as the Reliance Bearing and Gear Company, the family-run business employed 40 people at the end of 2017. Mr Creighton is the fourth generation of family members involved in the business.

1 Bank leaked my loan request to family who tried to rip me off
2 Suspicions rife as key Brexit trade talks begin in Brussels
3 Life as a Facebook moderator: ‘People are awful. This is what my job has taught me’
4 Corona beer firm reeling after 8% slide due to coronavirus
5 How well paid do you think you are? Here’s how to work it out
Real news has value SUBSCRIBE