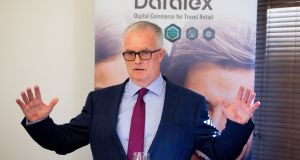 The acting chief executive of beleaguered travel software provider Datalex has been appointed to the role on a permanent basis.

Sean Corkery, previously chief executive of Denis O’Brien’s engineering services company Actavo, initially joined the company in April as its deputy chairman and non-executive director. He replaced Aidan Brogan in an acting chief executive capacity in May. Then, in June, he became interim chairman when Pascal Taggart resigned.

“I am delighted to become chief executive of Datalex on a permanent basis. The time I have spent at the Company so far has convinced me that there is a significant market opportunity, a powerful commercial model and we now have a very strong team in place to capitalise on this,” Mr Corkery said.

Datalex said its nominations committee has initiated a process to search for a non-executive chairman to succeed Mr Corkery on a permanent basis.

A board-commissioned review found significant accounting irregularities at Datalex last year, when it lost $47.25 million (€42.7 million), while its shares have been suspended from the Irish Stock Exchange since May.

Chief financial officer Niall O’Sullivan noted at the company’s recent agm that a review by PwC, which identified the accounting irregularities, had been referred to the Office of the Director of Corporate Enforcement, whose staff includes several gardaí.

Neither he nor Mr Corkery ruled Datalex out from taking legal action against former managers.

Revelations that it had overstated 2018 revenues rocked Datalex earlier this year. Its problems stemmed from a contract with Lufthansa, to provide a single payment system for its five airlines, which ran over time and budget.

Businessman Dermot Desmond, one of its bigger shareholders, has agreed to continue funding the business in the short term.