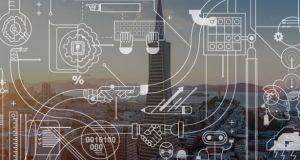 Plans are afoot to establish the first dedicated masters in artificial intelligence (AI) programme in the country as IDA Ireland continues with moves to establish the Republic as a leading hub for the technology.

The news comes as figures provided by TechIreland show there are at least 66 companies working in the space locally, employing almost 2,500 people.

The MSc, which is to be fully funded and managed by Technology Ireland ICT Skillnet, is intended to be an industry-led programme to be collaboratively created by ICT-related companies and higher-education institutions.

The masters will initially be targeted at those working in software engineering, data science, electronics engineering and business intelligence and will cover topics such as analytics, and machine and deep learning.

The objective is to begin recruitment of participants later this year with the first full-time one-year programme commencing in 2018. A two-year part-time masters is also envisaged.

Newly published figures from TechIreland, the public database aimed at providing a detailed portrait of Ireland’s start-up scene, shows the Republic is home to a vibrant open AI ecosystem.

The sector is also seen to be growing strongly with 61 per cent of companies working in the space having received funding, while 86 per cent have a live product.

The snapshot shows Irish AI companies, which include the likes of Artomatix, Voysis, Nuritas, SoapBox Labs, Movidius and Aylien, have raised €354 million in total. Seven Irish companies have achieved funding of more than €10 million apiece.

The majority of firms in the space are working in the area of enterprise solutions with health/medical, travel and industrial solutions also popular.

IDA Ireland has been at the forefront of moves to place Ireland at the centre of the AI revolution in recent years. Its chief technology officer Ken Finnegan told The Irish Times that the latest figures show a thriving community.

“It is really important to look to the past to understand where we are now. The pedigree that Ireland has from a technology perspective has derived over a long time and has its origins in the impact that companies such as Microsoft, Intel, IBM and Dell have had on the country. Many of these companies might not have been focusing on cutting-edge technology initially but over the years this has changed and so as a country we are well prepared in terms of core competencies,” said Mr Finnegan.

“This is really an evolution. We have an opportunity to do exceptionally well in artificial intelligence and the proposed masters programme will definitely help us in terms of adding to our credentials,” he added.