Jobbio to double Dublin workforce as it raises extra $10m 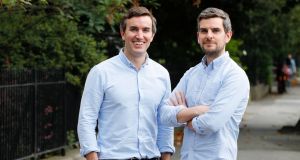 Jobbio founders John and Stephen Quinn. More than 6,000 companies are signed up to the platform. Photograph: Conor McCabe Photography

Dublin-headquartered hiring marketplace Jobbio has raised an additional $10 million (€8.4 million) and announced plans to double its workforce locally as it looks to expand further in the United Kingdom and North America.

The company, which was founded in 2015 by brothers Stephen and John Quinn, connects jobseekers and companies directly and privately so they can find out about opportunities as they arise. It also has a live applicant system that allows HR managers to manage a live talent pool.

Jobbio, which raised $5 million (€4.2 million) last September in a round led by NJF Capital, has more than 6,000 companies signed up to the platform, including Airbnb, EY, Ryanair, Intel, Deliveroo and Aon. The firm, which has a distribution network with a reach of 100 million candidates globally, said it is signing jobseekers at a rate of 250,000 per month. This compares with 100,000 signups a month a year ago.

“We’ve been growing at an unbelievably fast rate. Obviously we started in Dublin and then customers in the UK began using the platform so we set up shop there and now have over 1,500 companies and in addition are running the fastest-growing hiring event there in London this week,” chief executive Stephen Quinn told The Irish Times.

“We have also had great success in the US. Being in Dublin has given us great access to international brands, which has made the transition there that much smoother,” he added.

Investors in the latest round include Dermot Desmond’s International Investment and Underwriting (IIU), NJF and Balderton Capital founder Barry Maloney.

Jobbio currently employs 60 people across Dublin, London and New York. It now intends to double its workforce leading to the creation of about 45 jobs locally.

“Ireland is the head office and all the major HQ functions will stay in Dublin,” said Mr Quinn.

In addition to taking on more staff, Jobbio said it intends to build its strategic partnership base in the US, which currently includes agreements with the likes of media giant IDG and co-working provider WeWork.