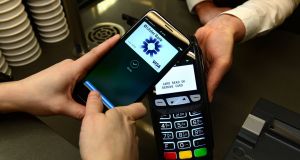 Apple Pay has launched in Ireland, more than two years after it first hit the market.

The contactless payment service can be used with more recent Apple products to pay for items in-store, online or through apps

The service requires one of Apple’s newer smartphones – the iPhone 6 and later – or an Apple Watch to be able pay for goods and services in shops. It will also work with newer iPads, the iPod Touch and online through Macs to pay for items online or through apps.

The first banks to sign up to the service in Ireland are Ulster Bank and KBC, although customers with competing financial institutions can still use the service through Boon, which allows users to add prepaid virtual cards and use them to fund Apple Pay purchases.

Pitched as easy to use, secure and private, Apple Pay uses multiple layers of security to ensure payment details are kept private. This security is built into both hardware and software.

The Apple Pay service is also protected with your device’s pass code or Touch ID fingerprint reader. Cards can also be removed remotely if the phone is lost or stolen, using Find My iPhone.

“It’s designed not just to protect your financial data, but also what you bought,” said Apple Pay vice-president Jennifer Bailey.

Irish consumers are traditionally heavy users of cash, although the use of contactless payments has picked up in recent years. The introduction of Apple Pay is expected to further accelerate the trend.

“Our customer satisfaction with Apple Pay is high. Once customers use it, they love it, and they seek out stores that use Apple Pay,” said Ms Bailey.

The service can be used at shops that have contactless terminals already installed, which are widely available in Ireland. Among Apple Pay’s launch partners are retailers Insomnia, Centra, and Applegreen, while the Guinness Storehouse will also accept the payments.

“We’ve seen a surge, particularly in the last year,” said Eddie Dillon, director of innovation at KBC Bank Ireland. “There’s been a near 80 per cent increase in the volume of digital online traffic from our existing online customer base. They’re aware of this capability.”

Although the Apple Pay service does not impose a limit on how much customers can spend in a transaction – and nor do the banks – retailers can choose to enforce the €30 contactless limit in place for contactless cards. Some older terminals may also have a limit in place.

“It’s part of our customer-centric innovation strategy,” she said. “In terms of our number, the customer numbers using mobile banking services is up 22 per cent in 2016 over 2015. The way people are banking is changing.”

The launch of Apple Pay comes a matter of months after rival service Android Pay was made available to customers here. AIB and KBC Bank offer that contactless payment service to customers.