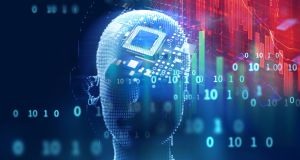 The forum said its findings indicate the need for urgent action with concerns that gender bias could enter the coding process, leading to real-world implications. Photograph: Getty Images

Men are much more likely to work in the area of artificial intelligence (AI) than women, according to a new report which finds the gender talent gap in the sector is three times larger than in other industries.

Research carried out by the World Economic Forum in collaboration with LinkedIn shows women account for just 22 per cent of the AI workforce. This, the forum warned, has huge implications for society as a whole as automation increases.

“In an era when human skills are increasingly important and complementary to technology, the world cannot afford to deprive itself of women’s talent in sectors in which talent is already scarce,” it said.

In addition to being outnumbered three to one, the research found that women working in AI are less likely to be positioned in senior roles. The data indicates that women with AI skills tend to be employed in areas such as data analytics, research, information management and teaching, whereas men tend to work in more lucrative and senior positions including as software engineers, heads of engineering or IT, or as chief executives.

The forum said given the depth of the problem there is a clear need for proactive measures to prevent a deepening of the gender gap in other industries where AI skills are becoming in demand. These include traditionally male-dominated industries such as manufacturing, hardware and networking as well as software and IT services, as well as traditionally female sectors such as non-profits, healthcare and education.

The forum said its findings indicate the need for urgent action with concerns that gender bias could enter the coding process, leading to real-world implications.

“Industries must proactively hardwire gender parity in the future of work through effective training, reskilling and upskilling interventions and tangible job transition pathways, which will be key to narrowing these emerging gender gaps and reversing the trends we are seeing today. It’s in their long-term interest because diverse businesses perform better,” said Saadia Zahidi, head of the centre for the new economy and society and Member of the Managing Board, World Economic Forum.