Dublin-based gaming group also announces deal to buy Sunny Side Up for CAD5.9m 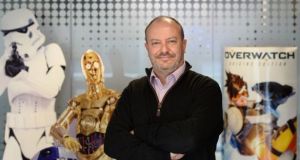 Keywords Studios, an Irish-headquartered but London-listed video gaming firm, has announced a deal to acquire Canadian company Sunny Side Up. It also said it expects full-year pretax profits to be about €37 million on revenues of €250 million.

This is at the bottom of consensus forecasts and 8 per cent below Davy’s projection of €40.4 million in profits before taxes.

Davy said the trading update implies that like-for-like sales at Keywords remained flat in the second half of the year.

“While we will need to wait until the end of January for Keywords to provide a fuller trading update, it does appear at first glance that the company was not immune to broader issues in the industry such as Fortnite Battle Royale’s effect on other developers and game launches,” the broker said.

Keywords on Friday said it is acquiring Sunny Side Up, a Quebec-headquartered company, for CAD5.9 million (€ 3.8 million), of which CAD4.75 million is to be paid in cash and the rest through the issue of 60,179 new ordinary shares in the Sandyford-based group.

Sunny Side Up produces marketing assets for game publishers and developers including trailers, key art assets and motion graphic production. Keywords said the deal would complement its current services offering in the space provided by subsidiaries such as Fire Without Smoke and The TrailerFarm.

Established in 2012 and with ebitda of CAD1.2 million in the year to September, Sunny Side Up works with many leading games developers and publishers including Ubisoft, EA and Eidos.

“As part of the group, Sunny Side Up will be able to leverage our well established presence in Montreal and Quebec City to support its continued growth,” said Keywords chief executive Andrew Day.

Keywords, which is listed on London’s AIM market, has a market value of more than €1 billion. It provides services to 23 of the top 25 most prominent games companies globally, including Tencent, Electronic Arts, Oculus, Supercell, Activision, Microsoft, Sega, Nintendo and Ubisoft.

In less than a decade, the group has grown from being a small studio employing 50 people at a single site in Dublin to one that now has up to 5,000 working across more than 40 locations in 20 countries. It has also shifted from being a single-service business to one with lines covering integrated art production, engineering, audio services, testing, localisation and player support services across 50 languages and multiple game platforms.