Lobby group letter calls for ComReg to be given additional resources 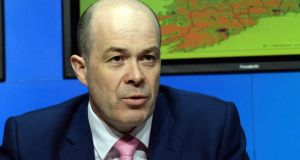 Minister for Communication Denis Naughten: ComReg needs to be given additional powers to allow it to regulate the market effectively. Photograph: Cyril Byrne

The communications regulator is seriously understaffed with an additional 70 employees needed to help it carry out its duties, Minister for Communications Denis Naughten has been warned.

The Minister has also been told that ComReg needs to be given additional powers to allow it to regulate the market effectively.

In a letter sent to Mr Naughten late in June, Alto, an umbrella group that includes all the leading Irish telecom operators bar Eir, called for steps to be taken to bolster resources at the regulator.

The letter comes amid concerns that two of ComReg’s three sitting commissioners are leaving shortly, and as incumbent Eir introduces a series of cost-cutting measures following its recent takeover.

Telecom operators, which pay a government levy of about €130 million a year, are alarmed at the lack of resources at the regulator.

“This issue is costing the State and the market in terms of effectiveness and efficiently as well as unnecessary legal expense,” he adds.

The industry body also expresses concern over a power vacuum at the regulator, with two commissioners due to leave at the end of next month.

Mr Naughten last week announced a recruitment process to appoint two new commissioners to replace chairman Gerry Fahy, who is retiring, and Kevin O’Brien, who is leaving to take up a role at the Central Bank.

The remaining commissioner, Jeremy Godfrey, who is due to take over as chair of the EU regulators group Berec at the end of the year, was recently reappointed for a second term.

In its letter, Alto also calls for civil sanction powers to be extended to ComReg to ensure it “has the required teeth to regulate the market effectively”.

The body is increasingly concerned about the impact to the market of moves by the new French owners of Eir to cut costs. The Irish Times recently revealed that plans are afoot to move the group’s HQ from the Heuston South Quarter to the out-of-town Citywest Business Campus in a bid to cut its rent bill by more than €10 million a year.

The move comes just three months after Eir unveiled plans to cut 750 jobs and as it recently decided to stop using media-buying firms to plan and buy all of its advertising.