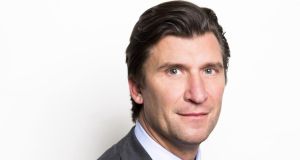 Colm Delves is stepping down as chief executive of Digicel, Denis O’Brien’s Caribbean mobile phone company, after more than a dozen years at the helm.

The company said Mr Delves, who was chief financial officer at the group before being appointed to the top role in 2005, is leaving his executive position for “personal and family reasons”.

Digicel is headquartered in Jamaica while Mr Delves’s family home is in south Dublin. The company said Mr Delves, a former KPMG accountant, signalled to the board “some time ago” his intention to step away. Digicel said he will remain a member of Digicel’s board as a non-executive director and will also provide it with advisory services.

“Having accrued more air miles than I care to admit and with Digicel very well positioned to capitalise on our unique market positions, I have decided now is the appropriate time to step down from my executive role to spend a bit more time on personal and family priorities,” said Mr Delves.

He will be replaced as chief executive by German businessman Alexander Matuschka Greiffenclau, who joins Digicel from his role as chief performance officer at Dutch-based telco Veon, which was previously known as Vimpelcom.

Mr Matuschka Greiffenclau, who was also previously a senior executive at Nokia, will take over the top role at Digicel next February.

He will continue the implementation of the group’s restructuring programme, known invariably as either Digicel 2030 or Project Swan, which was initiated by Mr Delves.

In February, Digicel revealed plans to axe about 25 per cent of its staff – more than 1,500 roles – over 18 months as it looks to restore declining earnings and ease the weight of its $6 billion-plus debt mountain.

Mr O’Brien welcomed the appointment of Mr Matuschka Greiffenclau, whom he described as a “natural fit” for the group.

“Our enthusiastic welcome of Alex is tempered only by the fact that Colm will be stepping down,” said Mr O’Brien. “We thank him for his enormous contribution to Digicel and we are very pleased that he has agreed to remain on board as a non-executive director.”