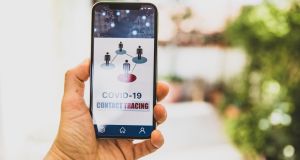 The contact tracing app would provide a way to help track down those who may have come into contact with confirmed cases of coronavirus, while protecting the privacy of users. Photograph: Getty

Where is Ireland’s contact tracing app? Lost in State limbo, it appears. Initially promised within 10 days back in March, the app was to have been an important weapon in the Government’s arsenal to fight Covid-19.

Using bluetooth, the app was intended to provide a way to help track down those who may have come into contact with confirmed cases of coronavirus, while protecting the privacy of users.

But while the app itself could technically have been built in 10 days, the layers of bureaucracy that accompany such a project were never likely to be overcome in such a short timescale.

Development of the app was farmed out to Waterford-based Nearform, and testing was already under way on the software when Apple and Google said they would join forces to facilitate the use of bluetooth with such apps.

While a welcome development, it would also have meant a bit of redesigning, delaying the release to the public.

If the app is to be effective, it needs about 60 per cent of people to install it. Any delay risks impacting the momentum

And now we are almost at the finishing line. The testing has been done, with gardaí around the country using it in early June. Each Government department has had its say. The data protection impact assessment has been completed. All that remains is for the Cabinet to rubber stamp it, so it can be released to the Apple and Google apps stores.

According to the HSE, that was all in place as of last week. But the final cabinet meeting of the outgoing government came and went, and the contact tracing app was not on the agenda.

Now we are in phase three of the country’s reopening, where many pubs and restaurants are once again open for business and people are returning to work. If the app is to be effective, it needs about 60 per cent of people to install it. Any delay risks impacting the momentum and, with it, the willingness of people to install the app. That’s not to mention the potential operating system updates that could send the app back to testing.

It now falls to the new Minister for Health Stephen Donnelly to get the app over the line before it becomes obsolete.