Snigger at ‘Serial’ tropes with ‘A Very Fatal Murder’ 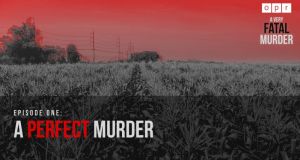 Serial may be credited with reviving the podcast scene but the trope of investigating an unsolved case and along the way revealing something about the very heart of America has been copied many times since and has now been paid homage to with the Onion’s parody podcast A Very Fatal Murder.

Fictional reporter for OPR (Onion Public Radio) David Pascall, with the aid of his MIT supercomputer ETHL (Extremely Timely Homicide Locator), seeks a murder that would also make for a great critically acclaimed podcast. ETHL’s suggestions include: “I have some murders that involve resentment of the white working class, would you like me to print?”

They finally settle for the unsolved case of Hayley Price from the small Nebraskan town of Bluff Springs. It has everything: a dead prom queen, a gruesome murder, “the decline of manufacturing, modern beauty standards, the gig economy, factory farming, deforestation, saturated fats, the fragility of love, the golden era of television, CO2 emissions, and most importantly, no-one had done a podcast about it yet”. My new favourite podcast.