Cantillon: Usheru gets start-up award, but has it started up yet? 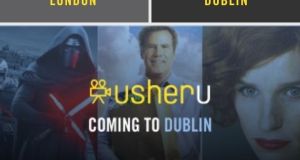 When has a start-up started up? That was one of the questions folks were asking themselves after the recent Digital Media Awards.

The decision to give the award for best Irish start-up using digital to Usheru caused a stir among the digerati. The problem, as commentators eagerly noted, is that the firm is not fully up and running in Ireland. Moreover, it lists its headquarters as being in the UK.

The Usheru app makes movie recommendations and offers discounted cinema tickets. It was launched in London last year. However, as of now, Irish users can’t buy tickets or fully avail of offers.

Organisers of the awards, Ashville Media, noted that Usheru has technically been available here since April 2015, which is true, but only in a limited format that doesn’t allow users to purchase tickets, arguably one of the app’s biggest selling points.

Usheru told The Irish Times a full ticketing solution will be live for users here in two weeks’ time. The start-up is, as you’d expect, chuffed at receiving the award, and who’d blame them for that?