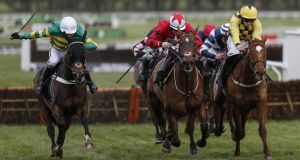 December racing at Cheltenham. Britain’s racecourses attract more than 6m people a year, many of them new to or unfamiliar with the sport. Photograph: Getty Images

Irish technology company Boscabet will provide digital tote betting displays at 55 British racecourses from next July, under a deal that the business hopes will triple its workforce.

Chief executive Fergal Downey confirmed at the weekend that the company had won a deal to provide display screens that would be used by a new business that would run tote betting at British racecourses from July 2018.

The tote is the pooled betting system run at most racecourses offering punters win and each-way wagers on each race, as well as jackpots, where they win large sums for picking the winner of several races, and exotics, where racegoers can predict the first two or three finishers in an individual contest.

A company controlled by the racecourses themselves will take over this business in Britain from July, when bookie chain Betfred relinquishes its current contract to operate the tote at British racing.

The new pool betting operator, as yet unnamed, has awarded the contract to provide the displays for the new service to Boscabet. Mr Downey predicted that the business would grow staff numbers in Ireland to 20 from seven.

Tracks such as Cheltenham and Aintree, familiar to many Irish people, will be among those adopting the new screens, although it will be after their big spring festivals. Goodwood’s festival – Glorious Goodwood – will be amongst the first big meetings where punters will see the new displays.

Boscabet’s interactive displays will show runners, riders, odds, statistics on jockeys and trainers and other information of use to punters looking for winners. Racing data specialist Timeform will provide some of the content.

The displays will replace the current tote screens at British racecourses showing only rudimentary details.

“We will be putting in interactive displays that will be dynamic, live and insight-driven,” Mr Downey said.

He said the idea was to offer accessible and easily-digested information that was particularly attractive to new racegoers, who are often confused by the sport’s jargon. He said one of the first things that new racegoers asked was “give us a tip”, and he said the company’s system would effectively provide this.

Britain’s racecourses attract more than 6 million people a year, many of them new to or unfamiliar with the sport. Boscabet’s displays will be a part of the tracks’ efforts to widen the sport’s appeal by making it more accessible.