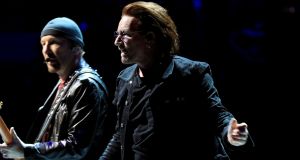 Bono and The Edge’s backing of Convoy is by no means the first tech investment made by the musicians. Photograph: EPA

On on-demand trucking technology company backed by U2 frontman Bono and lead guitarist The Edge has raised $198 million (€ 167 million) through the sale of new shares in a move that values the start-up at $1 billion (€850 million).

Based in Seattle, Convoy is a provider of on-demand shipment services designed to connect trucking companies with freight shippers. It has been described in some quarters as an “Uber for trucking”.

The company was named GeekWire’s “Start-up of the Year” for 2017.

The latest funding round was led by CapitalG (formerly Google Capital) a late-stage growth VC firm financed by the internet giant Alphabet. New investors T. Rowe Price and Lone Pine Capital also participated in the financing alongside a number of existing investors.

The investment brings Convoy’s total raised capital to $265 million (€225 million) and values the company at $1 billion, making it a so-called “tech unicorn”, alongside the likes of Uber, Airbnb, Stripe, Intercom and Pinterest.

“Trucks run empty 40 per cent of the time, and they often sit idle due to inefficient scheduling. This is a drag on the economy, the environment, and the bottom lines of shippers and carriers alike,” said Convoy co-founder and chief executive Dan Lewis.

“Convoy’s ability to serve our shippers and carriers with ground-breaking, innovative technology is already having an impact on these critical problems, and our partnership with CapitalG and other leading investors will accelerate this. We are very excited about what lies ahead,” he added.

Established in 2015, Convoy last year raised $62.5 million (€53.1 million) of Series B venture funding in a deal led by Y Combinator. It subsequently emerged that Bono and the Edge made a separate investment in the start-up, the financial details of which have not been disclosed.

Mr Lewis said at the time that having spent most of their lives on the road touring, the Irish musicians knew a thing or two about trucks.

This is by no means the first tech investment made by Bono and The Edge. Bono previously co-founded private equity firm Elevation Partners which has backed both Facebook and Yelp. The two musicians have also invested in Dropbox, and in Irish start-up Nuritas, a highly-regarded company that uses data mining of molecules in food and food byproducts to identify supplements and new drugs.