Fitbit Ionic gives you a smartwatch focused on fitness 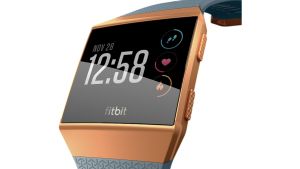 Fitbit Ionic: has built-in GPS, and is water-resistant up to 50m, which means you can take it swimming.

Where to buy: Fitbit.com

Depending on who you listen to, the wearables market is either dead on its feet or about to enter a new phase. Who is right? Who knows. But Fitbit, the company that has successfully persuaded millions of otherwise normal people that they should embrace the tyranny of the step tracker, is still churning out the wearables. The latest, Fitbit Ionic, is a smartwatch but with a definite fitness focus.

Fitbit bought Pebble’s assets back in 2016, taking some of its engineers too. The end result? Fitbit OS, which powers the Ionic and does a generally good job of it.

My first thought when I put it on my wrist was “chunky”. But that was mainly because the watch ships with two band sizes, and the large band was the default option. Swap it for the smaller band, and instead of standing away from your wrist, the watch face sits more snugly against it. There are three hardware buttons that allow you to interact with the watch on the metal casing, which also hosts the GPS antenna

The Ionic has a high-resolution colour touchscreen, just under 1.5 inches in size. On the rear is a heart rate monitor, which continually checks your heart rate as you are wearing it. On the inside, there is a range of sensors that measure everything from your movement for exercise to your sleep, giving you an overall view of your day from start to finish,

The Ionic has built-in GPS, and is water-resistant up to 50m, which means you can take it swimming. You can choose to allow Fitbit to automatically sense your activity and measure your exercise that way, or you can tell it what you’re doing to keep things more accurate. There’s a few different options to choose from – run, bike, swim – but you can add different ones to the watch through the exercise tab on the Fitbit app.

Speaking of apps, Fitbit comes with a few preinstalled, including timers, weather and a guided relaxation app. The Wallet app is a nod to increasing popularity of contactless payments, although in Ireland only KBC supports Fitbit’s version for now.

Just as this review was being written, a major update was pushed out for the Ionic that brought more apps and features such as swappable watch faces. But the standout app – for now at least – is Fitbit Coach. As the name suggests, it is a fitness coaching app, offering guided workouts, from a quick ab workout to something a little more taxing.

The Ionic is still in its early stages as a smartwatch, so it is missing some of the things you may have come to expect if you’ve been using an Apple Watch or similar. You can get notifications to your wrist from your phone, but your ability to interact with them is limited.

Battery life is one area where the Ionic has a definite edge. Unlike some other smartwatches, it’s not a case of charging it every night. Or even every other night. I got four days out of a single charge of the Ionic, which leaves many smartwatches in its dust. When the battery was running low, a timely email reminded me to charge up the watch, rather than my usual method of realising a smartwatch needed a charge about 30 minutes after it had switched off.

Battery life. Forget about being tethered to your charger every night; the Ionic has a battery that won’t let you down after less than a day. That’s important for a watch that is focusing on fitness; the last thing you need when you want to go for a run or some other type of exercise is to find that your battery has given up the ghost. Things it won’t do? The Ionic has no built-in speaker, so talking into your wrist isn’t an option. Thankfully. It is also quite dependant on your phone for giving you statistics, although the watch will keep seven days of detailed fitness data before you need to sync, and a month of daily data.

If you want a fully featured smartwatch, the lack of apps may be a negative. There are more coming in the new year, although some are scheduled in for closer to the end of 2018, which is disappointing. But how much do you really want to do on a tiny screen anyway?

The Ionic doesn’t have as detailed tracking in some respects as its rivals – you don’t get GPS data for swims, for example, nor does it track swim strokes. But it does keep things fairly simple, while giving you good information on your exercise, which is something that many people may prefer.

It’s still early days, but the Ionic has potential.

1 Investors pile into property as turnover in build-to-rent sector reaches €2.54bn
2 How can I view my dead brother’s will if I’m not the executor?
3 Provisional liquidator appointed to Dublin engineering firm
4 Bursting of Tesla bubble a case of ‘not if, but when’
5 Mount Charles wins €10m catering contract at Maynooth University
Real news has value SUBSCRIBE