Company announces new €22.1m investment that will take headcount in NI to 450 people 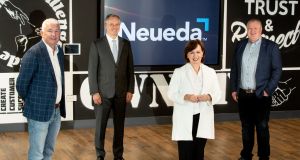 Northern Irish IT company Neueda Technologies is to create 230 jobs in Belfast as part of a £20 million (€22.1 million) investment.

The new roles include software engineers, cloud solution experts and sales. The investment is being supported by Invest Northern Ireland which is contributing £2.2 million towards the expansion.

Neueda, which was established by Brendan Monaghan in 2006, provides IT consultancy, analytics, training and software development to organisations across the public sector, utilities and capital markets.

The expansion will take headcount in Belfast to 450 people. The company also employs a further 200 people in Athlone, Co Westmeath.

This latest expansion comes just three years after the company announced a £12 million investment in the business.

“Our vision is to significantly grow our customer base outside Northern Ireland and this investment will give us the resources we need to achieve this ambitious growth strategy,” said chief operating officer Paddy O’Hagan.

“We hope to drive sales in the US, Britain, mainland Europe and eventually into Asian markets where we see an abundance of opportunities for our services,” he added.