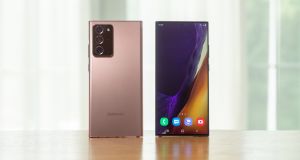 Samsung has unveiled a new Note handset, adding the Note 20 to its lineup at a virtual event to replace its regular “Unpacked” showcase.

The electronics company unveiled five devices during the event, including the Note devices, new tablets, another folding phone, a smartwatch and new ear buds, the Galaxy Buds Live.

There were few surprises at this year’s Unpacked event, with many of the details leaking ahead of Wednesday’s showcase.

The company is targeting both core Note fans and newcomers with the Note 20, which Samsung said would bring PC power and the best of mobile gaming to users. As with its predecessors, Samsung is making the Note 20 in two sizes. The 6.7-inch Note 20 is aimed at those who want the Note but in a more managable size, and the Note 20 Ultra, which will come with a higher resolution camera and a larger 6.9-inch display with 120Hz refresh rate capabilities, and is aimed at what Samsung refers to as “Note loyalists”.

Among the updates are a new chip and an updated pro video mode that allows users to capture 8K video at 24 frames per second. The Note 20 comes with a 64-megapixel camera, with the Note 20 Ultra boasting a 108-megapixel camera.

The Note 20 series also improves on the S Pen, the smart stylus that has been a staple of the Note series, making it more responsive, adding new gestures to navigate your smartphone. It has also improved hand writing recognition.

A new feature on the Note 20 will allow users to save their notes to the cloud and access them from any device, whether it is a phone, tablet or a PC, one you sign into your Samsung account. Users will also be able to attach and time sync voice recordings to notes.

Samsung was keen to push its integration with Windows, which allows for synchronisation of notes with Outlook and One Note, and has now been extended to gaming with a access to a curated library of more than 100 games in the cloud with Xbox Game Pass Ultimate.

Both Note 20 versions have 5G capabilities, futureproofing the devices for the next generation networks that are beginning to roll out globally, including in the Republic.

Samsung also unveiled two new additions to its tablet range at the event, the S7 and S7+ 5G, along with an updated version of its Galaxy Watch 3 and new Galaxy Buds that have been redesigned for a sleeker fit,

The phone maker also proved its commitment to the folding phone category, showing off the Galaxy Z Fold2. The new device comes with two edge-to-edgeInfinity-O Displays, a 6.2 inch cover screen and a 7.6-inch main screen. Samsung’s first attempt at launching the Fold last year ended with the company cancelling preorders as it refined the design. It eventually launched in September, and was followed by the Z Flip earlier this year.

1 Sean Quinn stunned at rebranding of Quinn Industrial Holdings
2 Probate is changing: What does that mean for you?
3 Dublin Aerospace takes over Flybe’s aircraft servicing base at Exeter Airport
4 Will tracker mortgage be at risk if Ulster Bank closes?
5 Irish golf tourism faces ‘wipeout’ unless Covid travel restrictions eased
Real news has value SUBSCRIBE