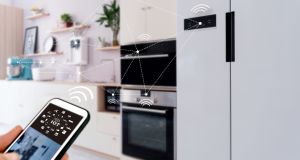 An illustration of how a ‘smart’ kitchen might work: 5G is expected to spur a rise in the number of connected devices in circulation. Photograph: iStock

A national working group on 5G should be established as a priority to ensure the State does not miss out on the significant economic opportunities associated with the technology, according to a new report.

The discussion document also warns that the absence of a roadmap for national 5G connectivity risks eroding Ireland’s economic competitiveness.

The report, which has been published by the Science Foundation Ireland-supported Connect research centre, Dublin City Council and Sligo County Council, draws on findings from a survey of mobile operators, equipment vendors and local authorities.

It concludes that it will be between five and 10 years before there is mainstream adoption and commercialisation of 5G nationwide.

The study authors urge a co-ordinated approach to the roll-out of the technology, involving Government departments, local authorities, business groups, utilities, and bodies such as ComReg and the Environmental Protection Agency.

“If Ireland wants to position itself as a global leader and be at the forefront of technological innovation, it is essential that we embrace 5G as it scales out over the coming years. At its most basic level, this will require us to align our national research and science agenda, facilitating testbeds that support local and international industry R&D teams, the report says.

The technology is the next generation of mobile connectivity which succeeds the current 4G and older 3G systems.

It brings faster speeds of over 1,000 megabits per second, as well as increased security, reliability and lower latency.

Having lower latency enables multiple devices to be easily connected together in a move that is expected to lead to a sharp rise in the number of internet of things (IoT) devices in circulation.

In addition, it could speed up the introduction of new technologies such as self-driving cars and robotic surgery.

Roll-out of 5G services is still at an early stage locally. Vodafone was the first Irish mobile provider to roll-out 5G here, albeit on a limited scale so far.

It launched the State’s first 5G network last August. Eir quickly followed suit while Three has said it will introduce services sometime in 2020.

“The economic opportunity associated with 5G and next-generation networks is well documented: the global impact in goods and services is expected to reach $12 trillion by 2035,” said Dr Brendan Jennings, interim director of Connect.

“A much more co-ordinated approach is needed if all regions in Ireland are to capitalise on this. The economic difficulties associated with the Covid-19 pandemic make this all the more urgent,” he added.

According to the study, local authorities – by virtue of their sheer operational influence and ownership of assets such as poles, ducting and street furniture in key locations – will play an instrumental role in Ireland’s path to 5G.

Jamie Cudden, who leads Dublin City Council’s efforts to turn the capital into a “smart” city, said collaboration between local authorities and mobile operators is critical in facilitating a sustainable rollout of the technology.

1 Should I switch bank now with Ulster Bank at risk of closing?
2 Air travel never going ‘back to way it was’
3 Will brother’s widow get half of our parents’ estate when they die?
4 Household wealth jumps by 74% since last recession – report
5 ‘Tax war’ will hit Ireland if digital tax talks fail, OECD says
Real news has value SUBSCRIBE