Banking on success: BoI’s use of robots allows it to be more human

‘It isn’t about replacing people with robots. It is about taking the robot out of the person’ 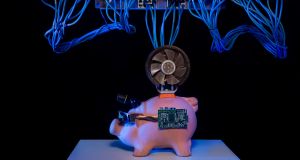 Using robots is less risky to organisations because unlike humans, they won’t make errors 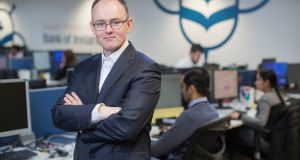 Jonathan Kidd, head of digital operations and robotics at Bank of Ireland at the Cabinteely centre

There have been plenty of concerns raised about whether robots will replace people in the workplace. Indeed it seems as though barely a day goes by without a new forecast outlining what particular professions are most likely to be wiped out by automation.

The reality is of course more complicated than that with some experts arguing that the real advantage of robots is their potential to free up workers from dull, repetitive tasks so they can focus on being well, more human.

“It isn’t about replacing people with robots. It is about taking the robot out of the person,” is how Jonathan Kidd puts it.

He should know. After all, Kidd is leading a project for Bank of Ireland that has seen it progress from having a handful of robots when its Robotic Process Automation (RPA) centre opened in Cabinteely three years ago, to more than 130 by the end of 2017 which look after 100 processes.

It should be noted that when we’re talking robots in this context, it is more a case of glorified macros that have been developed to automatically process routine transactions rather than a room full of replicants.

RPA is in effect the use of software to replace dull tasks that have traditionally been performed by humans. In addition to freeing up staff to do more exciting work it is also seen an alternative to outsourcing and off shoring operations and as a useful stopgap for companies looking to avoid a total overhaul of their IT infrastructure.

While you may imagine robotics to be something we will all eventually be contending with, there is a strong chance that we are already dealing with them for some fairly ordinary transactions.

Bank of Ireland, for example, is using them across a wide range of processes including reducing time and errors associated with credit card account opening, online notice of withdrawal, pin activation and underwriting case preparation.

The bank has one of the largest team of accredited robotics programmers in Ireland with a team of professionals looking after 70 robots working on core bank processing and a further 60 looking after data remediation. It is intending to continue to increase the number of processes looked after by robots, with a target of 200, many of which will have increased artificial intelligence (AI) capabilities.

“You might not be aware that you’re dealing with robots for some services but what you will see is an improved customer service experience and a more efficient operation overall at the bank,” says Kidd.

Kidd, whose official job title is head of digital operations and robotics at BoI, is the first to acknowledge that visitors to the Cabinteely centre can be a little disappointed at the lack of replicants on show. However he says that once they see the robots in action, most come away impressed.

“We’ve had about 650 people through our doors with nearly 10 per cent of Bank of Ireland employees coming to visit the centre. It has helped to educate staff who may have had concerns about robotics. We’ve also had visitors from other organisations who want to see how far we have progressed in using the technology,” he adds.

Given that banks are not usually at the forefront of technological innovation, it might come as a surprise to hear of BoI work in this space but, according to a recent Deloitte study, it is the only Irish organisation seen to have a mature level use of RPA, and one of only a handful across Europe.

The bank started its work with robotics by automating its ‘online notice of withdrawal’ function. While there was some scepticism initially internally, once it was seen to have significant benefits, the bank quickly moved to automate more processes.

“It is less about displacement of people than for smoothing capacity management and freeing up staff to do higher value tasks. We sold it in-house by explaining how using robots could greatly improve the customer experience,” says Kidd.

“Organisations increasingly want staff to play on their humanity and what humans can bring to transactions that AI or robots can’t is rapport and emotional understanding. Ironically, if robots do more repetitive tasks then that frees up more people to be human,” he adds.

Given that research from the Canadian company Yakidoo shows that 34 per cent of banks still rely on manual processes, the use of robots can only be a good thing, both for customers who increasingly expect transactions to happen in real-time, and for staff, who can move on from dull as dishwater duties.

Bank of Ireland now regularly uses robots to do tasks such as retrieving background information for loan applications, which humans would have traditionally done.

“Colleagues can increasingly focus on more value-adding activities while robots do the boring stuff that is time-consuming and repetitive, but obviously important,” says Kidd.

This makes sense but how do customers feel about robots having a say over financial transactions?

“We have a rule that no robot concludes customer sensitive or mid- to high-risk activities without a human reviewing it and I don’t imagine that would ever change, particularly as in our situation we’re dealing with people’s money,” says Kidd.

“It is possible that we’d let the robots do something less sensitive such as issuing duplicate statements because that is a fairly straightforward process but I don’t ever see them having a final say on big decisions,” he adds.

Kidd is also keen to point out that while humans make errors, robots typically don’t.

“One thing we made clear to management was that the robots won’t make mistakes. They will do whatever they have been programmed to do so it is a case of providing them with the right instructions. If anything, using robots is less risky to organisations because unlike humans, they won’t make errors when tired and so on,” he adds.

Kidd notes that the core difference between RPA and machine learning is that in the first instance, the robot will do exactly what you tell it to do, while in the second case it will look to learn and improve processes.

“RPA is great and has a huge role to play in organisation but it is really just the first step on an AI journey,” he says.