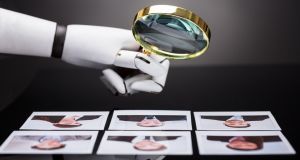 A magnifying glass may not be involved, but candidate searches are increasingly performed by AI. Photograph: iStock.

UK recruiters are developing technology, including artificial intelligence that allows them to offer people jobs before they even start to look, mindful that if they do not keep innovating, their own business models face redundancy.

Hays, one of the biggest recruiters in the world and the largest in Britain by market capitalisation, has set up a partnership with business network LinkedIn that allows it to access some of the company’s data, such as when a user adds a skill or profile picture.

With this sort of information, AI can identify someone who is about to begin a formal job hunt, allowing the company to pre-emptively contact them with relevant roles, said Alistair Cox, Hays chief executive.

“Data and artificial intelligence can give you some pretty accurate insights as to whether an individual would be receptive to a job that you’ve got on your books,” said Mr Cox. “[It’s part of] a race to get very strong candidates in front of your client before the competition.”

Hays is just one of the large global recruiters, several of which are headquartered in the UK, investing in technology in an effort to match jobseekers and roles more swiftly and efficiently.

One of its main rivals, PageGroup, has created an “innovations group” to find ways of improving the hiring process by making it more digital. That includes making it easier and quicker for candidates to find roles online themselves or for recruiters to single out individuals best suited for a role that has become vacant.

“What we want is a consultant not having to trawl through hundreds of candidates to identify the one that’s right for the job,” said Steve Ingham, PageGroup’s chief executive.

Technology is already replacing some of the more mundane tasks that headhunters typically undertake, such as screening CVs and manually sifting through candidates to draw up a shortlist.

Other developments include recruitment chatbots, a trend towards video CVs and using AI to profile job applicants.

But there is also the risk that the technology recruiters are adopting could cannibalise their own business, by automating their role as intermediaries and the swaths of jobs they would typically find candidates for.

“Technology is having a disruptive impact on the recruitment sector - and having an immediate effect today,” said Rahim Karim, support services analyst at Liberum.

“That effect is most strongly felt in the blue-collar sector where perhaps the disparity in skills between candidates is a lot less acute,” he added. “[But] it will hurt across the board at the lower levels of... white collar [jobs ] as well.”

Indeed, in December, shares in Hays and PageGroup, both recruiters for white-collar jobs, slipped more than 5 per cent after Deutsche Bank said that recruitment companies were overvalued, citing “structural pressure on gross margins, driven by improved procurement and technology”.

By its nature, the £32.2 billion sector tends to focus on the short term, with quarterly results driven by the immediate impact of economic and regulatory changes. At the same time, many UK recruiters have expanded overseas, while uncertainty about the UK post-Brexit has weighed on domestic business.

Collaboration with technology start-ups is now common. “Better to be working with them than fighting against it,” says Mr Cox.

Technology has also offered opportunities to small newcomers such as recruiters specialising in a particular sector. For example, where recruitment companies once had to build their own database of candidates, it is now much easier to find people on networks such as LinkedIn.

But recruiters also argue that the art of job matching will never be fully replaced by science. Technology will free up consultants to be more productive, giving them more time to offer clients tailored advice and develop a wider understanding of the market, they say.

“What will happen is recruiters will actually end up being much more like business consultants rather than doing desktop research,” said Albert Ellis, chief executive of Harvey Nash, a recruiter that specialises in technology.

Still, the automation of jobs remains an impending threat. A recent report by McKinsey forecast that between 400m and 800m people could be displaced by automation by 2030.

“The sheer volume of recruitment will go down in lots of sectors,” said Mr Ellis, adding that executive recruitment companies will be the most protected because board members are unlikely to be replaced by robots.

Recruiters, however, are confident they can adapt by focusing on skilled jobs and on the opportunities technology will bring.

“It’s hard to see businesses getting a big return on investment in technology yet,” said Giles Daubeney, deputy chief executive of recruiter Robert Walters. “But at some point that will tip.” – Copyright The Financial Times Limited 2018