The Irish space sector, like space itself, is expanding

Ireland’s first ever satellite, Eirsat 1, is set for launch under a European programme 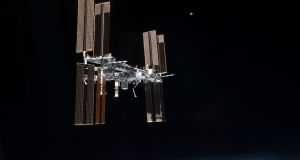 The International Space Station, from which Ireland’s first satellite, Eirsat 1, will be launched. Photograph: Nasa

For a sector that’s inspirational, recession-proof and astronomically ambitious, look no further than the stars.

Irish exports to the European space market in 2016 were estimated at €80 million in 2016, providing a stellar 4:1 return on State investment in the European Space Agency. Now Ireland’s first ever satellite, Eirsat 1, is set for launch under the agency’s programme Fly Your Satellite!

After it is delivered to the International Space Station, Eirsat 1 will be launched into orbit for 12 months. During this time, it will gather data on gamma ray bursts – which American space agency Nasa describes as “the most luminous and mysterious explosions in the universe” – and test space technologies developed in Ireland. “Ground control” will be at University College Dublin’s School of Physics.

There is no “I” in space: Eirsat 1, which is short for Educational Irish Research Satellite 1, is a collaborative project developed by students and staff of UCD and Queen’s University Belfast and is supported by industrial partners including Resonate, Enbio, SensL, Parameter Space and Moog Dublin.

At the core of the project is a programme of training and education for students, under guidance from academic and industry mentors as well as the European Space Agency itself. “One remarkable step for academic staff on the project, and one giant leap for our aerospace degree students,” was how it was described by Queen’s University’s Dr Gasser Abdelal, the lead structure engineer.

The Irish space sector, like space itself, is expanding, with some 60 Irish companies active in everything from vibration control technology to “sunscreen” for satellites to lasers, sensors and simulation software.

Along comes a mission like this one, with the potential to inspire the next generation of students to study science, technology, engineering and maths (Stem) subjects, and it is hard not to feel cheery about the future for once.