Outlook clouded by strong dollar and challenges in China 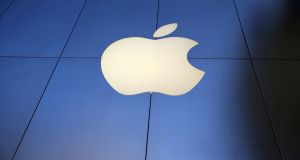 Apple reported a bigger-than-expected rise in iPhone sales for the holiday quarter but forecast current-quarter revenue below estimates as customers hold back on phone upgrades in anticipation of the launch of the 10th-anniversary iPhone.

The company said it had recorded new highs in sales of iPhones, Mac, Apple Watch and Apple Services during its all-important fiscal first quarter.

However, sales of iPads were down 19 per cent year-on-year and, despite the reported rise in watch sales, the “other product” category that includes the device saw sales slip 8 per cent on last year.

Apple sold 78.29 million iPhones in three months to December 31st, up from 74.78 million last year, marking the first quarterly growth in iPhone sales in a year. Analysts on average had estimated iPhone sales of 77.42 million, according to research firm FactSet StreetAccount.

Apple’s services business, which includes the App Store, Apple Pay and iCloud, recorded an 18.4 per cent growth in revenue, helped by the popularity of games such as Pokémon Go and Super Mario Run and higher revenue from subscriptions.

Overall, revenue in the quarter rose 3.3 per cent year-on-year to $78.35 billion, ahead of expectations. Of that, 64 per cent was earned outside the United States – despite a 12 per cent fall in China sales.

The company blamed the strong dollar for a gloomier than expected outlook with Apple projecting revenue of between $51.5 billion and $53.5 billion for the current quarter, below analyst projections of $53.79 billion.

But it expects its fast-growing services division to become an ever stronger element of the business. Revenue from services is expected to double over the next four years, the company said. – (Additional reporting, Reuters)