Computer firm paid 2 per cent on $74 billion in sales over past three years, committee hears 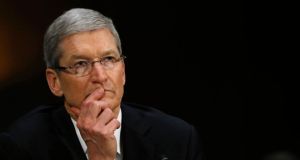 
Computer company Apple defended its tax practices and sheltering of $100 billion (€77 billion) in cash in Irish companies in the face of sharp criticism at a congressional hearing.

The Californian company was accused of using Ireland, described at the high-profile Senate hearing in Washington as “a tax haven”, to avoid paying tens of billions of dollars in US taxes.

Ireland’s tax system and reputation as a home for international subsidiaries of major US multinationals took a battering at the Capitol Hill hearing as Apple was criticised for shifting the lion’s share of the company’s worldwide profits into three Irish “ghost companies” that, under Irish tax law, do not pay taxes anywhere.

Apple has an agreement with the Irish government dating back to 1980 on which it has paid a tax rate of 2 per cent or less on $74 billion made on international sales outside North and South America over the past three years, the company told the Senate permanent subcommittee on investigations.

The company had shifted its “golden goose” or “crown jewels” – the economic rights to profits generated from Apple’s intellectual property and sales outside North and South America – to Ireland, said the subcommittee’s chairman Carl Levin, a Democratic senator from Michigan.

It was “not right” that the company should “shift its value to a tax haven, which is what Ireland is”, he said. He called for these “unacceptable, unfair corporate offshore tax loopholes” to be closed.

He questioned how Apple could describe the transfer of intellectual property rights as “an arms length agreement” between two separate parties when Apple owns and controls the foreign parties.

Tim Cook, chief executive of Apple, told senators the low-tax arrangements through its companies in Ireland were originally agreed in 1980 when the Irish government gave the company a tax incentive as part of a recruitment drive to attract technology companies to set up operations in Ireland.

The relationship with the Irish Government is “still there today,” he said.

Tax rate
Given the tax rate that you are paying in Ireland I am sure you have a very close relationship,” said Senator John McCain of Arizona, a member of the subcommittee, to laughs from the public gallery.

Mr Cook said the company’s Irish operations were “more than that” and that they had grown to employ almost 4,000 people. The Irish business continued to grow, he said.

“We have built up a significant skill base there of people that really understand the European market, that serve our customers well, that provide a number of functions for that,” he said. The Apple chief rejected the suggestion that the company was using Irish companies to avoid paying taxes in the US. All profits from products sold in the US were taxed in the US, said Mr Cook.

Apple Operations International, an Irish subsidiary which is not resident anywhere for tax purposes, was “nothing more than a holding company set up to provide an efficient way to manage Apple’s cash from income that has already been taxed,” he said.

The hearing was told by Apple’s head of tax Phillip Bullock that Apple Operations International, which is managed and controlled out of the US, had not submitted a tax return anywhere for five years.

Apple could do this through an “Irish legal concept” by showing that company, one of three Irish firms that it claimed were not tax resident anywhere, was not functionally managed or controlled in Ireland, he said.

Earnings made by these companies were described as “ocean income” by Harvard professor Stephen Shay in testimony before the Senate panel because the money was not tax resident in any country.

Another expert, Prof Richard Harvey of Villanova University, said he “almost out of my chair” when Apple claimed that they “do not use tax gimmicks”.

In heated exchanges with the Apple executives, Mr Levin asked Apple whether it would only bring back $100 billion held in the Irish companies to the United States if America repatriation tax was lowered.

No plans
“I have no current plans to bring them back at the current tax rate,” said Mr Cook.

He told the subcommittee that it would be “very expensive” to repatriate the cash in Ireland to the US and called for a “reasonable” tax rate to be introduced in the US and America’s tax code to be simplified.

Mr McCain said the “disturbing truth” was that 60 per cent of Apple’s profits are routed through Ireland but the company claims that they are tax resident nowhere in the world.

He said that it was “completely outrageous” that Apple had avoided US taxes through “convoluted and pernicious” tax strategies.