PES 2020: Mastery on the pitch, but frustrating off it

Review: Some issues will leave PES veterans with tinge of disappointment 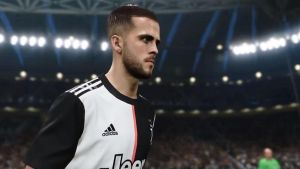 The slogan “this pitch is ours” appears when you first turn on eFootball Pro Evolution Soccer 2020 and based off the gameplay in this year’s edition of Konami’s football game, the Japanese company may have a valid point.

PES owns football on the pitch this year, with satisfying moments throughout. The way a game flows is crucial to the enjoyment of a virtual football match, everything from the balance between defence and attack to the speed of turnovers to the weight of passing. It can be hard to quantify, but all it takes is one issue to be off for the whole game to suffer. PES 2020 has this balance right as much as any football video game that’s ever been made.

Passing is crisp and timing-based, which means that it is easy to give away the ball if not concentrating, but it is also possible to pull off intricate passing moves that can unlock the tightest defence.

The developers worked closely with former Barcelona star Andrés Iniesta to revamp the dribbling system in the game with finesse dribbling and dummy kick two important additions, as well as a new stat allowing players with ability in tight possession to flourish.

Shooting is much improved on PES 2020 and feels responsive when trying to get a shot off quickly around the box, while long-range shooting has become a more legitimate way to score. Defending is another action that requires good timing, with new sliding tackle and heading animations. The AI is smart and good to play against, although it is often too clean and games can unrealistically pass by without any fouls.

Action on the pitch is illustrated beautifully with a new default stadium camera angle and the appearances of certain players who play for teams that PES 2020 is partnered with, Cristiano Ronaldo for example, are stunningly recreated.

PES can never compete with Fifa for team and league licences but has exclusive rights to Juventus, as well as rights for teams such as Barcelona, Manchester United and Bayern Munich. Almost all UEFA national teams are fully licenced and PES 2020 is an official partner of the Euro 2020 tournament. Everything else can be modified to your own desire with a comprehensive Edit Mode.

All good so far then, but most loyal PES players will have taken good gameplay for granted as play on the pitch has always been decent. What keeps you playing all year is game modes and presentation, the off-the-pitch stuff that PES 2020 is often lacking.

Presentation is a little slicker in PES 2020, but still no match for any Fifa equivalent. It also lags behind in sound, the commentary is monotonous and the crowd chanting rarely makes you feel like you’re playing a real game.

Master League was the crown jewel for PES back in the glory days of PS2, and they have made welcome improvements to the mode here, with nicely made cut-scenes and more realistic player transfer negotiations. However, disappointingly the answers given in press conferences don’t appear to make any difference to your team’s performance and the regeneration of retired players as new players kills immersion after a few seasons.

Become a Legend was a major selling point for PES about 10 years ago, but has now grown stale and has been untouched in years, with harsh player ratings and no depth to player or match performance stats.

In terms of online modes, MyClub allows the player to build up their own fantasy team and compete against others throughout the world. Unlike Fifa and NBA 2k games it is to be admired that it is possible to make a great team in a reasonable amount of time without micro-transactions, but it is missing the variety of options of Fifa’s Ultimate Team. Matchday mode is a welcome new feature which takes the form of a tournament, where you join one of two sides of a rivalry and play games to earn points for your team.

Online divisions play well as it brings it back to just straight gameplay, but the structure of the divisions and points system can sometimes frustrate with teams of different abilities pitted against each other. On online co-op, being able to play as one player with two CPU against three humans remains, despite many fans complaints last year.

All these issues will leave PES veterans with a tinge of disappointment. In mastering action on the pitch eFootball Pro Evolution Soccer 2020 got the hard part right. PES 2020 is a fun and engaging football sim. But, frustratingly, it could have been even better.