Review: EA has tightened screws in some areas after Fifa 19 – but that isn’t saying much 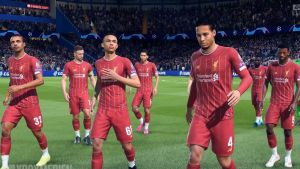 Available on: Playstation 4,PC,Xbox One

As far as games go, Fifa could almost be considered an institution. Each autumn, a tweaked version in shiny new packaging hits the shelves – and immediately divides football fans.

So what keeps bringing fans back every year?

The cynical view would be that EA Sports do just enough to keep people interested through clever marketing gimmicks, while in modern times the migration of an online community from one game to the next forces the more hardcore gamers to follow suit.

This year, however, Fifa 20 has brought something new to the table that isn’t just a slight amendment to dribbling, first-touch or shooting: say hello to Volta game mode.

Fifa players of a certain vintage will fondly remember the indoor football mode of Fifa 97, while the majority will remember playing the recent Fifa Street series. Volta is an amalgamation of the two, bringing the game back to the streets and five-a-side football. It’s not as arcadey as Fifa Street – there are no Gamebreakers here and less focus on skill moves – but it is frantic and played with the same ethos.

Matches are played on 17 street courts across the world with a wide variety of rules, everything from 3-a-side to 4-a-side with rush keepers to a more serious futsal game. Volta can be played in Kick Off mode with friends, where half the fun comes in picking the teams. You can face up with Pogba, Kanté and Mbappé against Messi, Suarez, Griezmann, and the form really comes into its own with 5-a-side futsal game on a slightly bigger pitch.

The Journey, the story mode from the last three Fifa games, came to an end in Fifa 19 and has been replaced by a story mode on Volta. This sees players rise through the ranks on the streets with their customised player. It is also possible to play tournaments in the Volta mode with your customised character both online and offline.

Pro Clubs features in Fifa 20 once again, where you control one player as part of a club and compete against other clubs online, and in Kick-Off mode, the Mystery Ball adds a fun alternative to the No Rules and Survival games that were added last year.

Career Mode gets a slight change with increased player interactions and pre-match press conferences adding a bit of gloss to the presentation. It is now possible to customise your manager’s avatar to your heart’s content, while the inclusion of female managers in the mode for the first time in the Fifa series is a nice addition.

But once you delve a little deeper, serious problems emerge. A single bug or a glitch is understandable, but the number of issues with Career Mode on launch led to an online campaign that saw #FixCareerMode trend on Twitter and gained traction on Reddit. Some of the issues included no transfer deadline in Premier League; Champions League group stages not being updated; top teams playing reserve players and finishing with low points totals and even ending up in relegation places; unrealistic fixture scheduling; and player positions changing after editing players.

While EA Sport have addressed some of the issues and are working to patch the problems, it is a kick in the teeth for players that enjoy playing Fifa offline.

Career Mode lacks the care that is put into Ultimate Team, which is given by far the most prominence in Fifa 20 as EA’s real money-generator, given that the aim of the game is to build the best possible squad and buy the best players through microtransactions.

Ultimate Team has come in for its own share of criticism, with gambling charities highlighting the pack openings and the game’s trading system as normalising gambling for children. The pay-to-play element of the mode can be off-putting, but for fans of Ultimate Team, it really is a game within a game – the many options and objectives make it the most complete mode in Fifa 20.

Presentation in Fifa 20 is slick as always; all the main team licences are there (apart from Juventus and Brazil) and the Champions League returns. But, what about football on the pitch?

If you played Fifa 19, then the game mechanics in Fifa 20 are noticeably different, even if the game looks very similar. In Fifa 20, pace is a massive factor, particularly from wing positions. Scoring cutback goals with low crosses will be a common tactic. This was too difficult to pull off in Fifa 19 – and given how often goals like these are scored in real life, this is a welcome adjustment. It is now much easier to beat your man one-on-one, with manual defending made more difficult – a considerable change from last year. Attacking heading has gone from overpowered to being quite useless, while shooting is less automatic than last year, with goalkeepers harder to beat in one-on-one situations.

Is it an improvement on last year? Perhaps, but Fifa 19 was not a high point in the series. The balance and flow of the game is not quite right, especially in comparison with its main rival, Pro Evolution Soccer 2020. Playing online divisions, games often descended into 4-3 and 5-4 scorelines with chances too easy to come by and the game switching from one side to pitch to the other like a basketball match. The Frostbite engine that was introduced in Fifa 17 probably requires an update, which we may not see until the time of the Playstation 5.

It means that Fifa 20 is ultimately hindered by shallow gameplay, which is a pity given the plethora of game modes, online and offline. There is plenty to like about Fifa 20, but in the league table of 25 years of Fifa games, this is closer to mid-table mediocrity than a Champions League contender.