Reddit bans misleading deepfakes ahead of US presidential election 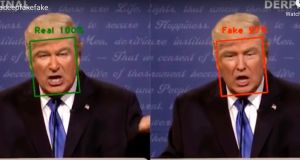 Example of a deep fake

In an attempt to prevent the spread of deepfakes during the 2020 US presidential election campaign, social media site Reddit has changed its policy on forms of impersonation on the platform. Even though Reddit says impersonation is one of the rarest kinds of reports it receives from users, the growth of deepfakes over the past couple of years could have an impact on the spread – and believability – of fake news.

The social media site said it hadn’t encountered many malicious deepfakes of politicians but that it is something we could be seeing much more in the future. Pornographic deepfakes are the most common but these are already prohibited under Reddit’s pornography rule.

The new impersonation policy, said Reddit, also includes a ban on “fake articles falsely attributed to real journalists, forged election communications purporting to come from real agencies or officials, or scammy domains posing as those of a particular news outlet or politician (always be sure to check URLs closely – .co does NOT equal .com!)”.

If you enjoy seeing Nic Cage deepfakes (and who doesn’t) then worry not. Reddit said it will still allow these. The kinds of deepfakes that will get banned are only those that are misleading in a malicious manner. reddit.com