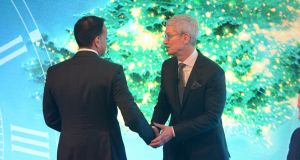 Apple has played a key role in making “Ireland the tech capital of Europe”, Taoiseach Leo Varadkar has said.

Speaking at an event in Dublin to mark the iPhone maker’s 40 years in the State, attended by Apple chief executive Tim Cook, Mr Varadkar paid tribute to the company’s contribution to the Irish economy.

“Only four years after it was founded, Apple opened a factory in Hollyhill in Cork, employing 60 people,” he said.

“Today, Apple is Cork’s largest employer with 6,000 people of over 100 different nationalities and is a global operation,” Mr Varadkar said.

“During this period Ireland has become the tech capital of Europe. We succeeded by looking to the future, opening our country to trade and competition,” he said.

Mr Cook reconfirmed the company’s commitment to the Republic, describing the country as Apple’s “second home”.

“I believe deeply that our most important work together is still ahead of us,” Mr Cook said, paying tribute to the company’s Irish staff.

“I accept this award on Apple’s behalf and as a symbol of our unshakeable commitment to and investment in this place we have called home for 40 years, almost as long as Apple itself has existed.”

Mr Cook lauded the “bonds of friendship” between the US and Ireland, and heaped praise on the company’s Cork home. “We chose Cork to be our first operation outside Cupertino and our gateway to our European customers for good reason. It sits at a geopolitical, economic and cultural crossroads, where the winds of innovation and opportunity blow freely.”

Mr Cook also touched on the issues of climate change, education, privacy and the weaponising of data during his address, outlining Apple’s charitable programmes and work with local schools.

There was no mention of Apple’s and the Irish Government’s ongoing appeal of the European Commission’s €13 billion tax ruling. Outside the event, Mr Varadkar said the matter had been discussed previously, but was now the subject of a court case.

The tech giant has been accused of avoiding billions in tax by moving its US profits into Irish subsidiaries.

In 2016, following a two-year investigation, the Commission ordered Apple to pay €13 billion (plus interest) in back taxes to the Government here, claiming the company had received “illegal” tax benefits over the course of two decades that constituted a breach of state-aid rules.

Mr Varadkar presented Mr Cook with the IDA’s inaugural special recognition award, which was awarded to Apple in recognition of its contribution to foreign direct investment (FDI) here.

The company is the first recipient of the award, which IDA Ireland chief executive Martin Shanahan said would become an annual event. “We believe it is important that we celebrate the huge contribution our 1500 FDI companies have made to Ireland,” he said.

“FDI continues to be a substantive driver of the economy,” Mr Shanahan said. “Our client companies in Ireland have demonstrated longevity, resilience and continued commitment, creating jobs – the numbers directly employed in the multinational sector in Ireland is at an all-time high of 245,096 (10 per cent of the Irish labour force) – and delivering enormous benefits to the national and regional economies,” he said.