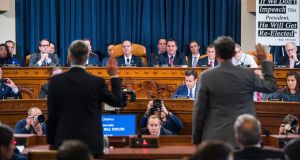 The impeachment inquiry into Mr Trump entered a new phase this week with the holding of public hearings. Photograph: Jim Lo Scalzo/EPA 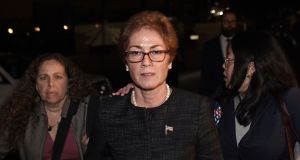 Marie Yovanovitch previously told lawmakers that she believed she was the victim of a concerted campaign to remove her from her post orchestrated by President Donald Trump’s personal lawyer Rudy Giuliani and others. Photograph: Olivier Douliery/File/AFP/via Getty Images

Marie Yovanovitch, the career State Department official who was recalled early by the Trump administration as ambassador to Ukraine, will testify today before the House Intelligence Committee – the third witness to appear in the public impeachment hearings.

Ms Yovanovitch previously told lawmakers that she believed she was the victim of a concerted campaign to remove her from her post orchestrated by President Donald Trump’s personal lawyer Rudy Giuliani and others.

Her testimony will be seen as a key part of Democrats’ case that Mr Trump operated an irregular foreign policy campaign in Ukraine that was not in America’s interests – the key focus of the impeachment inquiry. Her appearance comes two days after her successor as ambassador to Ukraine, Bill Taylor, and State Department official George Kent became the first witnesses to publicly testify.

Ms Yovanovitch told lawmakers at a private hearing last month that she was informed by then deputy secretary of state John Sullivan that she had “done nothing wrong,” but that “the President had lost confidence in me and no longer wished me to serve as his ambassador.” She left the position in May.

“Although I understand that I served at the pleasure of the President, I was nevertheless incredulous that the US government chose to remove an ambassador based, as best as I can tell, on unfounded and false claims by people with clearly questionable motives,” she said.

Ms Yovanovitch’s public deposition comes as House speaker Nancy Pelosi accused Mr Trump of “bribery”. Her comments suggest that Democrats could be seeking to charge Mr Trump with a crime that is specifically named in the constitution, rather than for a “quid pro quo” in his dealings with Ukraine. “Treason, bribery, or other high crimes and misdemeanors” are named as impeachable offenses in the US constitution.

Speaking at a press conference in the US Capitol on Thursday, Ms Pelosi said that Wednesday’s testimony “corroborated evidence of bribery uncovered in the inquiry and that the president abused power and violated his oath by threatening to withhold military aid and a White House meeting in exchange for an investigation into a political rival”.

Noting that what Mr Trump had done “make[s] what Nixon did look almost small” –  a reference to the former president who resigned over the Watergate affair – she said: “The bribe is to grant or withhold military assistance in return for a public statement of a fake investigation into the elections. That’s bribery.”

However, Ms Pelosi refused to be drawn on whether bribery would form an article of impeachment drawn up against Mr Trump, insisting that the House had not yet taken a decision on whether to impeach the president.

“We haven’t even made a decision to impeach,” she said. “That’s what the inquiry is about. And when the committees decide that, then they will decide what the articles are.”

Her language – which contained several references to bribery but avoided mention of a quid pro quo – echoed that of house intelligence committee chairman Adam Schiff in a radio interview on Thursday. “On the basis of what the witnesses have had to say so far, there are any number of potentially impeachable offenses, including bribery, including high crimes and misdemeanors,” he said.

The impeachment inquiry into Mr Trump, which was prompted by the release of a reconstructed phone call between Mr Trump and Ukrainian president Volodymyr Zelenskiy during which Mr Trump asked his Ukrainian counterpart to investigate former vice president Joe Biden and his son Hunter, entered a new phase this week with the holding of public hearings. Several witnesses are scheduled to testify next week.

Republicans have called for the anonymous whistleblower who first lodged a complaint about the presidential phone call to testify. “Where’s the Fake Whistleblower?,” Mr Trump said in a tweet yesterday before he headed to Louisiana for a rally ahead of a gubernatorial election in the state.

House minority leader Kevin McCarthy suggested on Thursday that Mr Schiff had lied during Wednesday’s hearings when he said he did not know who the whistleblower was.

While representatives from Mr Schiff’s office met with the anonymous whistleblower earlier this year, the Californian representative has said he is unaware of the whistleblower’s identity. Asked by reporters at a press conference if he believed Mr Schiff had lied, Mr McCarthy replied: “Yes ... I think Adam Schiff has lied numerous times.”

Speaking on the House floor, minority leader Steny Hoyer warned against naming the whistleblower, noting the existence of a whistleblower statute which protects more than 60,000 federal workers. “I would hope that Members on both sides of the aisle, political pundits and commentators, and, yes, the President of the United States, would cease and desist from trying to intimidate this whistleblower and all those who might be whistleblowers,” he said.